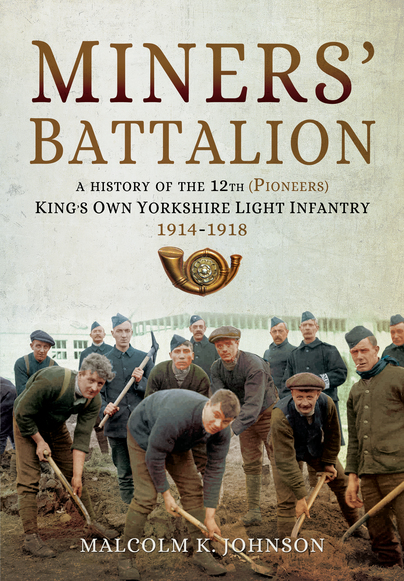 Add to Basket
Add to Wishlist
You'll be £13.99 closer to your next £10.00 credit when you purchase Miners' Battalion. What's this?
+£4.50 UK Delivery or free UK delivery if order is over £35
(click here for international delivery rates)

The true nature and functions of a pioneer battalion were never fully understood during the war either by military or laymen. Pioneers pioneers, mused a red-hatted Staff Captain to me the other day. Sort of labour battalion, arent you? We sure are! I agreed. These words, written by Captain R. Ede England, who served with 12th King's Own Yorkshire Light Infantry during the whole of the Great War, are as true today as they were when he wrote the original history of the battalion in the early 1920s.

Little is known, or understood, of the contribution made by the many thousands of men who served with the original Pioneer battalions. Building and repairing roads, bridges, railway lines, gun emplacements, and laying barbed wire to protect the Front Line, were just some of the tasks that they performed on a regular basis. Fortunately, the subject of the British Armys logistical support in the war zone during the new industrialised warfare that developed between 1914 and 1918 is now being examined in greater detail.

Miners Battalion, A History of the 12th (Pioneers) Kings Own Yorkshire Light Infantry 1914-1918 follows the battalion throughout the war and shows how the men, mainly Yorkshire miners, applied their civilian skills to the purposes of war. It also reveals that in 1918, when forced to fight as infantrymen, the battalion performed with distinction, gaining the nickname 'the Yorkshire Guards'.

This enhanced reprint, with further explanations and many photographs can only be highly recommended.

This is an excellent study of the men who built the military infrastructure of WWI. It proves that wars are won by picks and shovels as well as rifles and cannon.

All in all I found this an interesting book
which highlighted another aspect of the troops involved in the support of the fighting on the Western Front in particular. Well worth reading.

Malcolm K. Johnson has researched the history of the Kings Own Yorkshire Light Infantry (KOYLI) for over thirty years. In two published works he explored the experiences of a Volunteer battalion, and its Territorial battalions, who were ill-prepared for the industrialised warfare of 19141918. A third book examined the social effect of that war on an ordinary Yorkshire family. He has published a photographic history of KOYLI, 1857-1968, and the final volume of the Regiments History, 1945-1968. He has an MA degree from the University of Birmingham in First World War Studies.