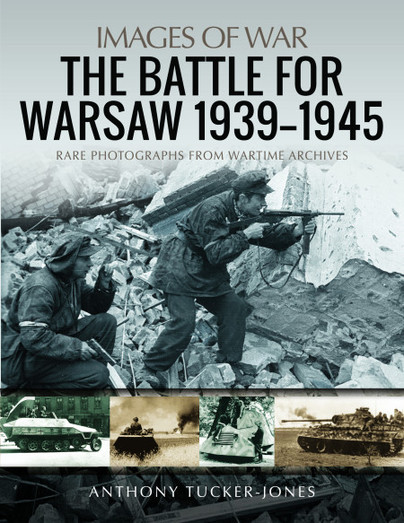 During the Second World War five brutal battles were fought in and around Warsaw. Each proved to be dramatic, decisive and bloody, and in this volume of the Images of War series Anthony Tucker-Jones records them all in graphic detail.

The first occurred in 1939 when the Polish army was defeated by the German invaders, and five years of occupation followed. The second was sparked by the Jewish Ghetto Uprising in 1943 which was ruthlessly suppressed by 1,200 SS troops and led to the deaths of 13,000 people. In the third the Red Army’s advance was beaten back at the gates of the city in the summer of 1944 and the fourth was fought at the same time when the Nazis crushed the rising of the Polish Home Army and sought to destroy the city in an act of revenge. The failure of the rising consigned the country to decades of communist rule.

The photographs and the detailed narrative give the reader a powerful impression of the experience of the people of Warsaw during this tragic period in their history and document the widespread devastation the fighting left in its wake.

This is an important collection of photographs, tied together with brief but thorough explanations of events as they occurred. It's hard to look away from these photos -- and we shouldn't, because it's far too easy to forget.

An interesting work that portrays a period of war of great historical importance as only Anthony Tucker-Jones knows how to do it.

A new book from the very popular Images of War series. Many will think of the Battle for Warsaw as the rising in August 1944, this book shows graphically the battle from before the formal start of WWII until its end. – Highly Recommended.

This book brings together some rare photographs for the various battles for Warsaw, all of which evocative. Throughout the Second World War, the city of Warsaw suffered worse than most cities across Europe. It was bombed from the 1st September 1939, and that would carry on for the duration of the war.

Prior to the outbreak of war, Warsaw had often been referred to as the ‘Paris of the North’, by the time the war ended it was a ruin. Her people had suffered misery upon misery, she had seen her city bombed, but the biggest stab in the back was as the Soviets sat watching Warsaw being bombed to destruction by the Nazis as retribution for the Warsaw rising in 1944, the Nazis doing to the Poles which would save them a job.

The pictures of highly evocative, a young boy sat amongst the rubble of 1939, the people of Warsaw feeding on dead horses and other animals as the German’s starves them in to surrender as they bomb them.

The horrors of the Ghetto, the pictures of Jews being rounded up by the Germans, remind you that evil walked amongst us, while the world looked away. Pictures of the German artillery shelling Zamehofa Street, which had been considered a Jewish stronghold. Or the fires which were set on Nowolipie Street, where the SS troops watched on knowing the Jewish fighters could only jump to their death, or suffer serious injury and then suffer at the hands of the SS.

From the haunting pictures of the Home Army, to those killed in action against the enemy, to the soviet ‘liberation’. To the soviets Warsaw reminded them of Stalingrad and the destruction that had been brought by the Germans.

The collection of pictures in this book are highly evocative, and while the Russians and Germans try and hide the blame for starting the war, these pictures reminded that the victims and Warsaw did not ask to be invaded or bombed. While German’s point to Dresden and the bombing of that city, to accuse the allied bombing as a War Crime, no mention of that they did time and time again. But then Russians, like the Germans have their own Sonderweg. Our job is to remind them they were no innocents, and this book is testament to that.

The book, as is usual with this series, contains many unpublished photos but in this case, especially for the section dedicated to the Ghetto Uprising, also many photos known but that could not be excluded. This series of photos had been included in the report to Himmler by Jurgen Stroop, who treated the operation as a military venture. The series of photos of the destruction of one of the most beautiful cities in the world makes us understand how fortunate other cities have been in not meeting the same end during that sad war.

The photographs come from a wide range of sources including the Fortepan Photo Archive, the Polish National Digital Archive, US Archives (including the National Archives and Records Administration) and the author’s own collection. The amount of information provided for each photograph is exceptional and it is very evident that particular care had been taken in the choice of images. This book is a particularly good example of Pen & Sword’s excellent ‘Images of War’ series and I commend the author for building such a comprehensive portfolio of fascinating images and writing such an interesting accompanying narrative.

The text is clearly written and tells the story more than adequately. Tucker-Jones made me want to read more: that’s a result.

This title as part of the Images at War series is another great title in the line up as the images do show the inhumanity to man in a way that words alone fail to do. Whenever we think of barbarity we of the Eastern Front with Russia and SS atrocities that were carried out, the brutality shown to the Poles is never really considered in the west and this book goes some way to remedy that situation.

This new Images of War title from author Anthony Tucker-Jones tells us what is really a sad story, the large scale destruction of the city of Warsaw and its' population in WW2.
The Introduction sets the scene rather neatly, reminding us that there were actually 5 significant battles for the Polish city during WW2. The first was in the German invasion of Poland in 1939. The second was in 1943, with the uprising in the Jewish Warsaw Ghetto. The third was the failed Russian attack in the summer of 1944, and that was at the same time as the Polish Home Army also tried to relieve Warsaw from the German oppression. It was left to 1945 for the Red Army to finally liberate the city. The stories of each of these 5 particular battles are spread across 8 chapters, each one introduced by a few pages of informative text to tell set the scene for the series of equally well captioned archive images which are the signature of the Images of War series. The destruction they show, including a number which have some quite graphic scenes of the dead, and the number of casualties among the citizens of the city thanks to the war is quite staggering.
The final section does at least show us that some of the Nazi perpetrators were brought to justice, while the task of rebuilding the city, recovering and burying the dead from the ruins and from within the underground sewers are all included. I think the reader can't help but wonder at what has been accomplished in rebuilding the city as it is today, but at the time, in 1945, it must have been a horrendous challenge to wonder where to even start the process. Another excellent addition to the series from the author.

I’ve been really looking forward to this book, I suppose because I have learnt a lot about this particular battle and harsh journey Poland had to go through during the Second World War. I see the book was authored by Anthony Tucker-Jones, who I quite like and I have read a number of his other Images of War books and you always get a good, balanced read. Having thought that the Polish might be able to fight with German troops against Stalin’s Russia, unfortunately, Hitler had other plans and saw Poland as an easy target it could attack before Russia. In a way, the Battle for Warsaw runs very much along the same lines as Germany attacking and taking Poland. The book begins with Warsaw 39, which was basically the invasion of Poland. Further chapters look into The Siege, Guderian’s Trains, Horrors of the Ghetto, The Second Battle for Warsaw, Warsaw Rising and the Tragic Last Stand. This really is a fascinating book and I was hooked as the reader, even though I already knew most of what went on. Again, the Images in the book are very good, also knowing what actually did go on in Poland and how bad some of the images could have been, the images in this book are tastefully done and not too horrific reject the reader.

Yet another fantastic book from the Images of War series and credit should be given to both the author and the publishers' Pen and Sword. I might be biased but I would recommend this book and the series.

I have read quite a few books in this series now and this is another great addition. The text is easy to read and informative throughout and the images that have been chosen are excellent.

The book is fine to read as a stand-alone, or it can also be used to encourage the reader to look in to more around the subject, and that is what I like most about this series – indeed this was one I picked up to find out more and it was perfect for what I needed. It is 4 stars from me – highly recommended!!

The series continues to deliver excellent images complemented by sound historical narrative. A good introduction book to the subject.