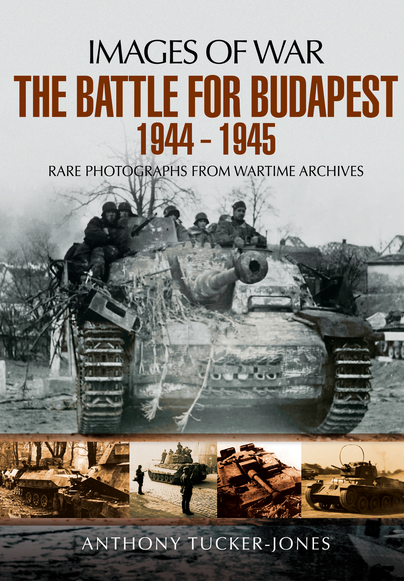 The desperate struggle between the Wehrmacht and the Red Army for Budapest in 1944 and 1945 was as lethal and destructive as any of the urban battles fought during the Second World War. The losses of men and equipment sustained by the Germans were so great that they hastened the collapse of Hitler’s regime. Yet what happened in Budapest is less well remembered today than other flashpoints in the conflict on the Eastern Front. Anthony Tucker-Jones’s photographic history is a fascinating and graphic introduction to this neglected episode in the closing months of the war.
The battle began with Operation Panzerfaust in October 1944 when the Germans seized Hungarian leader Admiral Horthy to prevent his country defecting to the Soviets. Red Army advances then left German and Hungarian units trapped in the city and sparked fifty days of intense fighting. Then in March 1945 Hitler launched Operation Spring Awakening, the reckless final German offensive of the war, designed to recapture Budapest and stabilize the Eastern Front. It failed spectacularly, opening the road to Vienna for the Red Army.
The selection of archive photographs gives a sharp insight into every aspect of the fighting in and around Budapest and records the ravaged city the battle left behind.

As with the other Images of War books, the pictures are key. Here many reveal men, vehicles and urban combat revealing details of makeshift armour, camouflage, and destruction. Those alone will make this book a welcome addition to many modelers' references.

Anthony Tucker-Jones's photographic history is a fascinating and graphic introduction to this neglected episode in the closing months of the war...

Pictures are very sharp and clear. Many interesting things to see for both the historian and modeler.

The selection of archive photographs gives a sharp insight into every aspect of the fighting in and around Budapest and records the ravaged city the battle left behind. Anthony Tucker-Jones’s photographic history is a fascinating and graphic introduction to this neglected episode in the closing months of the war.

Packed with black and white photographs, this book is broken down into eight chapters including ‘Hungarian Turning Point’, Skorzeny’s Panzerfaust’, ‘SS Trapped in Budapest’ and ‘Tolbukhin’s Masterstroke’. In typical Tucker-Jones style there is no holding back with casualty and burial photographs and scenes of shattered Budapest are ten a plenty. They are all part of the story, but there is also no shortage of good shots of German, Hungarian and Soviet military vehicles, both in service and out as well as good studies of soldier’s cold weather gear which was essential for all.
No shortage of inspiration for diorama lovers and a great general reference for the modeller and historian alike, the many scenes within this book, will prove very useful to all. Highly recommended and thanks again to Pen & Sword for our copy.

It’s a highly enlightening book, with both the pictures and the excellent text giving a vivid account of the fierce fighting and subsequent destruction that occurred, in addition to explaining the tactics and strategies involved. It’s very readable and I highly recommend it.

As featured on Military modelling