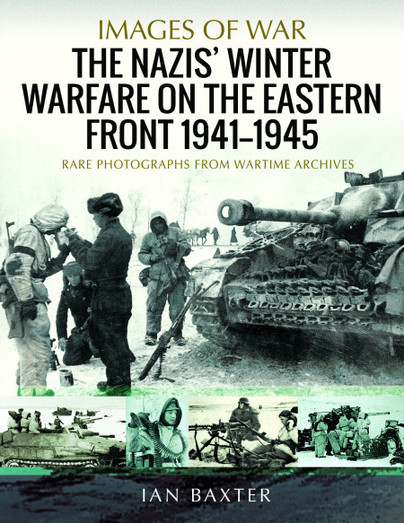 
"...the real stars of Baxter’s book are the diagrams of how to survive in the field. Those alone make this volume a fascinating read and a great addition to your personal library."

"Very good information and good quality photographs makes this quite worthwhile and of value to the modeler."

Germany's struggle against the horrendous winter weather on the Eastern Front proved to be as challenging and costly as its battles with the Red Army. It of course lost the fight with the latter, but from unpromising beginnings when the Wehrmacht discovered that it was wholly unprepared and ill-equipped for the winter of 1941, it improvised, learned to cope with, and ultimately mastered the conditions. This entry in the "Images of War" series shows the chaos of that first winter, with the heavy rains turning dirt roads to impassable quagmires, followed by the arctic conditions which brought the advance to a halt as men and equipment froze. Later photographs show the many types of shelters they learned to construct, and these are featured alongside illustrations from the Winter Buch of 1942, which instructed the troops how to build a variety of shelters out of and beneath the snow, from those which could be hastily improvised to cover a single man, to igloos and much larger and complex ones which incorporated fires and chimneys, and could protect a tank. The large photographs cover a broad range of subjects, and many different infantry units, roles, artillery and vehicles are included.

"Back to the book, the captions contain lots of uniform details as well as a nugget or two of tactical info."

There is lots of detail within the photos themselves, for both WW2 historians and modellers alike. The special bit for this one is the inclusion of the elements from the wartime book giving advice on living & working in severe winter conditions. These diagrams off plenty of ideas for those of you who are fans of building dioramas.

As usual this book contains some fantastic photography but when you see quite a few of them, the determination and strength of the soldiers in this particular part of the conflict showed how much guts and determination they had. The condition and scale of distance was so extreme, in some ways it’s not surprising how many men died for a cause. The book contains a large number of diagrams and drawings showing ways in which to survive better from the terrible weather and conditions and also fight the enemy. These were a fascinating insight into fighting in this arena of warfare, they certainly add another dimension to the book and learning. The book is split into chapters that concentrate on each year of winter, there is less text in this book which I suppose gives more scope for photography but I still think there was enough valuable text to support the photography. Another excellent book in the series.

Another superb Images of War title, this time featuring the Nazis' invasion of USSR in 1941 and their campaigns on the Eastern Front. Amazing to think there are so many still unpublished photographs of this conflict.

This offering from Pen and Sword, rates very highly with me due to the period photographs with well written captions, which along with the drawn images provide the modeller with information I was not expecting to find in this title. So along with the photographs showing the conditions faced by troops in the field, in the harsh Winters on the Eastern Front. You also get these drawn images, that can spark your imagination for displaying your latest masterpiece. I also like that there is some blank pages at the end of the book for making some notes on images and drawings that really appeal to you, and making them easy to find.

As usual for the Images of War series, some stunning photographs.

The cover describes the contents of this useful book, and it is literally a collection of photographs and a short narrative of the winter warfare in the East. It is highly enjoyable to read, and it is highly commended.

Four winters in HELL: Rare photos from Operation Barbarossa reveal the horrors faced by Hitler's troops who were sent to take Moscow... with little thought for the Siberian cold that awaited them