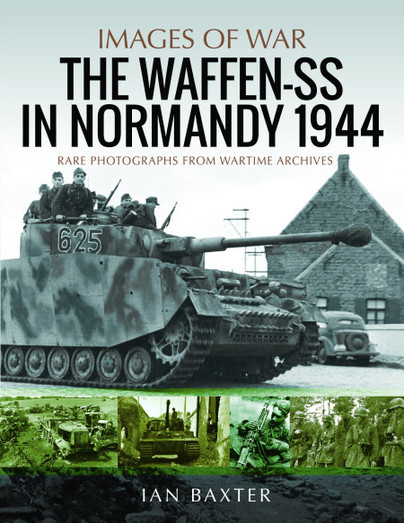 In June 1944, Operation OVERLORD, the greatest ever amphibious invasion, initially overwhelmed German Normandy defences. To attempt to stabilise the situation, Hitler deployed his elite Waffen-SS divisions to avert the crisis.

This classic Images of War book describes how the formidable Leibstandarte, Das Reich, Hitlerjugend, Hohenstaufen, and the Frundsberg SS divisions with supporting Wehrmacht divisions fought fanatically despite facing overwhelming enemy airpower and determined well-led Allied armies. Mounting losses and supply and fuel problems culminated in the Falaise Pocket defeat, when twenty-five out of the thirty-eight German division were completely destroyed. As a result, the remaining Waffen-SS units had to be reluctantly withdrawn and transferred back to Holland and, Belgium to recoup, or sent to the Eastern Front to attempt to stem the relentless Soviet advance.

With many rare and unpublished photographs with detailed captions, Waffen-SS in Normandy is a graphic account of the Waffen-SS operations in Normandy and their subsequent retreat through France.

"This book will make a very good historical reference for AMPS builders that want to know more about how the SS Divisions faired in Normandy, backed with some photographic evidence."

This was a really enjoyable book to read, fascinating to see really young men being soldiers and having to endure war at such a young age. I must credit the author Ian Baxter, as it seems when you read an Ian Baxter book, you’ll always get a well written and researched book. This book feels a little smaller than others in the series, but it is certainly an excellent book.

As a modeller I love these titles that are released in the Images of War series by Pen and Sword. The photographs allow you to pick out details for specific units, and specific places and often present you with situations where someone would say “That would never happen”, and so allows you to say “Not only did it happen, but here is an images that proves it”.

Ian Baxter has once again produced a book through excellent research and knowledge of the archives in which to look. Many books over the years have been written about Normandy 1944, usually from the American-British perspective and the heroic endeavours that those forces faced from the beaches to the interior of Normandy.

We know that the Allied forces faced a fierce German defence of Normandy, but little is in the English language about those German forces. They do tend to feature amongst much of the literature but not usually in a dedicated book. Especially as Hitler had deployed his elite Waffen-SS to try and stabilise the defence of France and push the allied forces back.

Through this book we find how the formidable Waffen-SS divisions, Liebstandarte, Das Reich, Hitlerjugend, Hohenstaufen and the Frundsberg supported the Wehrmacht divisions in the defence of France. As German lines became more stretched, fighting on two fronts, growing losses, supply issues and fuel problems. All these ultimately led to their defeat at the Falaise Pocket at the Germans were facing a better supplied, well-led and more determined Allied Divisions.

As with other Baxter books there are a lot of rare and unpublished pictures used throughout this book. All very well captioned which give a graphic account of the Waffen-SS actions in Normandy 1944.

This really is a must read book for all those that love Military History and the Battle for Normandy.

Lots of interesting images showing uniforms, equipment, artillery and AFVs used by the SS units in the campaign. I felt it was good to include the atrocities carried out by certain SS units balanced against the tough defence they put up in the confines of the close Norman countryside. Plenty to interest the historians' interest in the Normandy campaign of 1944 as well as plenty of detail for modellers and a good selection of diorama inspiration.