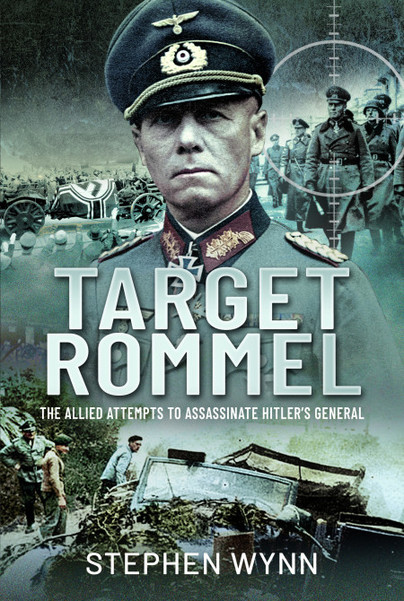 Add to Basket
Add to Wishlist
You'll be £16.00 closer to your next £10.00 credit when you purchase Target Rommel. What's this?
+£4.50 UK Delivery or free UK delivery if order is over £35
(click here for international delivery rates)

From a German perspective, the highly decorated and well respected General Erwin Rommel was one of their biggest and brightest assets: a military strategist who thought ‘outside of the box’, a tactic which more than once either brought him an unexpected victory, or saved him from almost certain defeat. His reputation had been gained early in the Second World War, whilst commander of the 7th Panzer Division during the invasion of France, and as the commander of German forces during the North African campaign between 1941 and 1943.

Such was his influence not only as a military strategist but on the morale of the men who served under him, as well as that of the German public, that the British government decided it needed to make concerted efforts to try to capture or eliminate him, making Rommel the only German officer of the Second World War that the allied authorities were prepared to put such time, manpower and commitment into eliminating.

Two operations were put in to place to try to achieve this: Operation Flipper in November 1941, and Operation Gaff in July 1944. Both operations failed for different reasons, but just three months after the latter of the two operations, Rommel was dead, forced to commit suicide by Adolf Hitler for his part in the attempt to assassinate him on 20 July 1944. Such was the level of Rommel’s popularity and importance that the Nazi authorities reported the cause of his death to be injuries sustained in an attack on his staff car by enemy aircraft. Indeed, it was only after the war that the truth behind his death was revealed.

A compelling and revelatory account of one of the lesser known events of World War II, and one with a particularly ironic conclusion when Adolph Hitler accomplished what the Allied Forces failed to achieve in two well planed attempts, "Target Rommel: The Allied Attempts to Assassinate Hitler's General" is an inherently fascinating read.