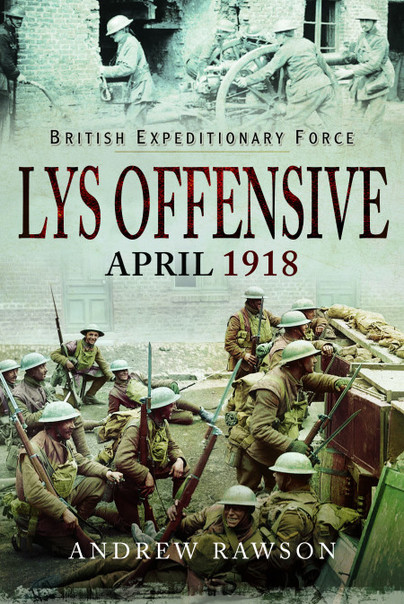 Add to Basket
Add to Wishlist
You'll be £19.99 closer to your next £10.00 credit when you purchase British Expeditionary Force - Lys Offensive. What's this?
+£4.50 UK Delivery or free UK delivery if order is over £35
(click here for international delivery rates)

This is an account of the British Expeditionary Force’s defensive battle in Flanders during April 1918. It begins with the planning for Operation Georgette, the second German offensive of the year. The attack on 9 April penetrated up to 6 miles on a 20 mile wide front across the Lys plain but further attacks resulted in the evacuation of the town of Armentières.

For three weeks First Army and Second Army fought to stem the onslaught as GHQ struggled to find reserves to help them. The situation became so desperate that Field Marshal Sir Douglas Haig had to issue his famous ‘backs to the walls’ order on 11 April.

Reinforcements stopped the Germans reaching Hazebrouck rail centre but they could not stop them reaching Bailleul. The French helped stem the tide but the battle climaxed with the loss of the Kemmelberg and the Scherpenberg, the two highest hills in Flandees.

Each stage of the battle is given equal treatment, with detailed insights into the most talked about side of the campaign, the British side. Fifty maps chart the day by day progress of each corps on each day. This is an insight into the BEF’s experience during this campaign. The men who made a difference are mentioned; those who led the advances, those who stopped the counter-attacks and those who were awarded the Victoria Cross. Discover the Cambrai campaign and learn how the British Army’s brave soldiers fought and died fighting to achieve their objectives.

Rawson's book develops wonderfully the wider theme also that many who were fighting had little battle experience, with insufficient time to replace the Somme casualties. In addition, there were too few veteran officers and NCO's to train men, with many not knowing each other before battle. They also fought a determined enemy. But, the book brings out illuminating detail Haigs order was realised: 'with our backs to the wall and believing in the justice of our cause each one of us must fight on to the end'.

In this well written book each phase of the battle is given equal treatment along with detailed insights.