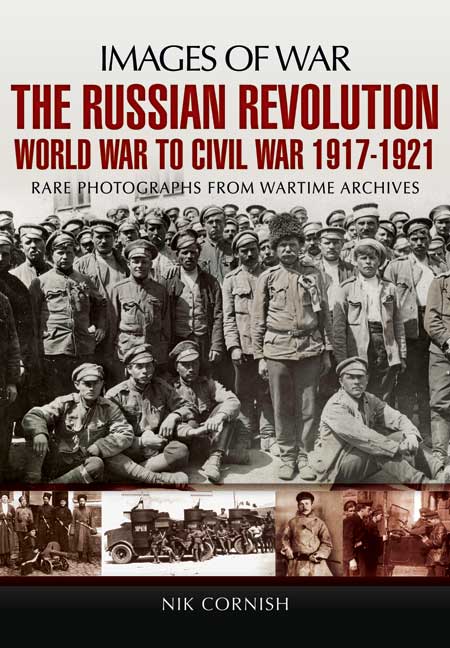 Click here for help on how to download our eBooks
Add to Basket
Add to Wishlist
Get The Russian Revolution (ePub) for FREE when you purchase 2 other eBooks.
Need a currency converter? Check XE.com for live rates

Often the drama of the October Revolution and the Bolshevik seizure of power overshadow the disastrous Russian-German war that preceded it and the extended, confusing, many-sided civil war between the Reds and the Whites that followed. But Nik Cornish’s vivid photographic history gives equal coverage to each of these momentous events and shows how the Russian empire of the Romanovs was transformed into the Soviet dictatorship.

Contemporary photographs show the leading characters in the drama – Tsar Nicholas II, Kerensky, Lenin and Trotsky and other Bosheviks, and the White commanders Denikin, Kolchak, Wrangel and the rest. But they also record, in an unforgettable way, the ordinary people who were caught up in the surge of events – civilian crowds on the city streets, peasant groups in the villages, the faces of common soldiers on all sides who fought on multiple fronts across Russia from Poland, the Baltic states and the White Sea to the Black Sea and Siberia.

The scale of the conflict was remarkable, as was the intensity of the experience of those who took part and witnessed it, and this collection of historic photographs gives a poignant insight into the conditions of their time. It is a fascinating introduction to a period that saw a seachange in Russian history.

An introduction to a crucial era in Russian history: Photos give glimpses of the uniforms, weapons, and various settings to inform modeling pursuits in this timeframe.

Now, I share Nik Cornish’s passionate interest in this period of history (though I would never claim his depth of knowledge, the man is superb on all aspects of the subject), and their simply aren’t enough books on this period.
To sum up, I can give no great compliment to Mr Cornish than to say in all sincerity that if I had to recommend only one book on this incredible period on history, it would be his.

Taking it as a modeller I was interested to read a relatively concise account of the conflict, starting before WW1 had ended for much of Europe and therefore distracts us from the story.
For those interested in uniforms then this has lots of interesting references, and for some units demonstrating that there was nothing ‘uniform’ between troops in the same unit, indicating the diverse nature of these fighters who came together.
So an interesting and useful account of the events that we round up under the title of the Russian Revolution but illustrated with some fascinating photo content to support and add life and body to the story, and maybe something of a hint of what was to come in WW2.
All in all another good value for money photo reference in the Images of War series.

This book is one of a series produced by pen and Sword using photographs many which are very rare and not seen before, all of which show the reality of varied conflicts in graphic images. Consisting of a total of 144 pages, each chapter is full of photographs and there are wonderfully supplemented by a very readable and informative text. If this is your period of interest then this should be on your bookshelves, a great book full of very thought provoking images and very inspirational. Highly recommended.

This is a wonderful book. The photographs are all stunning, offering masses of scope to re-enactors or model makers. The text is concise and easy to follow, but concentration making sense of the myriad of armed factions, front and going on.
You might use this book as a stepping stone to more advanced understanding of the beginners of the USSR or you might just enjoy looking at great photographs of such a range of people, events and nationalities. Whatever your reason, this book is on the button and well worth the money.