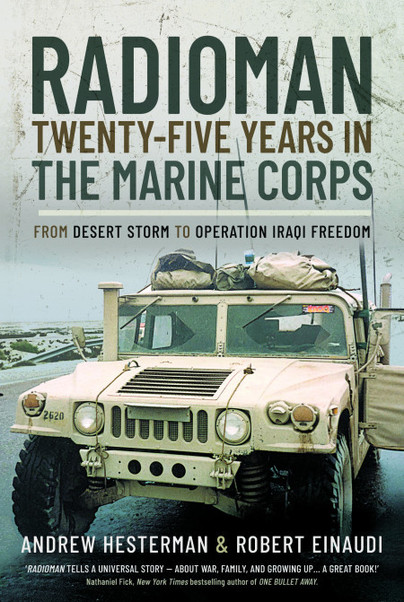 Add to Basket
Add to Wishlist
You'll be £20.00 closer to your next £10.00 credit when you purchase Radioman: Twenty-Five Years in the Marine Corps. What's this?
+£4.50 UK Delivery or free UK delivery if order is over £35
(click here for international delivery rates)

"RADIOMAN tells a universal story -- about war, family, and growing up. Andy Hesterman's 25 years in the Marines span a huge range of world events and personal experiences. I found myself laughing, rooting for him, and shaking my head at the insanity of it all. A great book!" - Nathaniel Fick, NY Times best-selling author of ONE BULLET AWAY

“From a recruit surviving boot camp to a Major flying combat helicopters and controlling F/A-18s in Iraq, Andy Hesterman shares the pride of the Corps and the pain of saying goodbye to your family for yet another deployment. With Radioman, you’ll feel like you’ve put on the Marine cammies and marched alongside Hesty for over two decades of service to our country.” - Dell Epperson, Captain, U.S. Navy (Retired)

"Radioman is far more than the story of one man's 25-year journey through the modern Marine Corps - as fascinating as that story is. It is also an account of the extraordinary changes - technological, tactical, moral - that have utterly transformed the American military in that time. Both gripping and honest, Radioman is also told with a humor and humility that makes for an extremely pleasurable read." - "Scott Anderson, New York Times best-selling author of THE QUIET AMERICANS"

From a Gulf War grunt to a full-fledged Marine Major in the wars in Iraq and Afghanistan, Andrew Hesterman saw it all. Radioman offers a highly personal and unfiltered view of the Marine Corps as it transitioned from the post-Vietnam analog Reagan era to the post-9/11 high-tech George W. Bush and Obama years.

Radioman begins with Andy as a recruit at boot camp and the ensuing training that leads to formally becoming a Marine. After comm school and the reserves, Andy is called to active duty in 1991 for the Gulf War, where he experiences combat up close in Kuwait. The next personally, professionally, and politically tumultuous decade brings marriage (and divorce), flight school and helicopter missions in Kosovo, the shock of 9/11, another marriage, and children. Andy’s journey culminates as an officer in Iraq, where he directs air support for the Marines in Fallujah.

Co-authored by Robert Einaudi, a close friend of Hesterman’s since high school, Radioman provides an honest and vivid military portrait of the Marine Corps and the modern US military seen through the experiences of one Marine.


Well, that concern was put to rest just reading the prologue! I've laughed and cried reading this, but the end result is I admire our military even more (I was raised in the USAF) and the Hestermans in particular.

I haven't picked up a book in several years since most of the 'knowledge' in the USMC was forced fed through the pub IV. When I heard a buddy was writing this book, I became excited to read and find out even more stories from my fellow devildogs! I am almost all the way through this book, and couldn't be more satisfied with finally picking up another book and taking the time to read this!

What a great read!! Andy has managed somehow to write something that is very different from the usual i.e. "how I killed bin laden" or the " inside scoop on seal team six and how they operate"..

There is an incredible amount of detail about his time in service and he can remember minute details with great clarity.

I enjoy reading military memoir especially when they are written by the service member. This one is about Marine’s twenty five year service. Covering the author’s time in the Marines from Desert Storm through the war on terror. Very informative read.

Robert Einaudi is an entrepreneur living in Seattle, Washington. He is a graduate of Stanford University and the Iowa Writers’ Workshop.

Major Andrew Hesterman enlisted in the United States Marine Corp in 1987. Over twenty-five years, he rose through the ranks as a pilot, instructor pilot, air officer, officer instructor, deputy air officer, and squadron executive officer. His military career spanned five presidents and four conflicts, before he retired from the USMC in 2013. He is the recipient of the Bronze Star Medal, Meritorious Service Medal, Navy Marine Corps Commendation and Achievement Medals, as well as the Combat Action Ribbon. Andy lives in Florida, where he works with FEMA on hurricane relief.