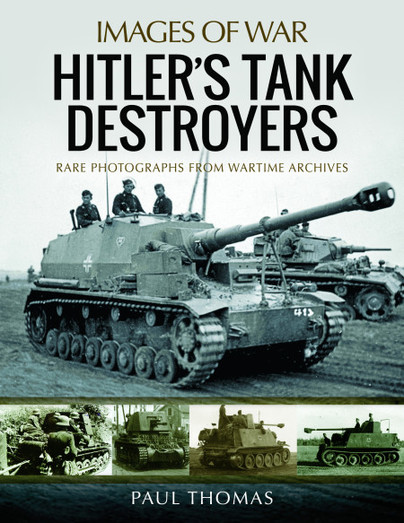 Add to Basket
Add to Wishlist
You'll be £8.99 closer to your next £10.00 credit when you purchase Hitler's Tank Destroyers. What's this?
+£4.50 UK Delivery or free UK delivery if order is over £35
(click here for international delivery rates)

Dedicated German anti-tank vehicles made their first major appearance in the Second World War as combatants developed effective armoured vehicles and tactics. Some were little more than stopgap solutions, mounting an anti-tank gun on a tracked vehicle to give mobility, while others were more sophisticated designs. The book covers the development and technology throughout the war that led to tank destroyers like the Panzerjger I, Sturmgeschtz, Marders, Nashorn. Hetzer, Jagdpanzer, Elefant, Jagdtiger IV and Jagdpanther vehicles being developed.

As the war progressed the tank destroyers fire power became more lethal to meet the ever increasing threat against Soviet armour. Larger and more powerful variants entered the battlefield, but due the overwhelming enemy opposition they were compelled not only to attack armour, but to support ground troops too. This comprehensive account covers all the Nazis mobile anti-tank vehicles in words and images.

... this book is one for the bookshelf of anyone interested in the development and deployment of AFVs though the Second World War.