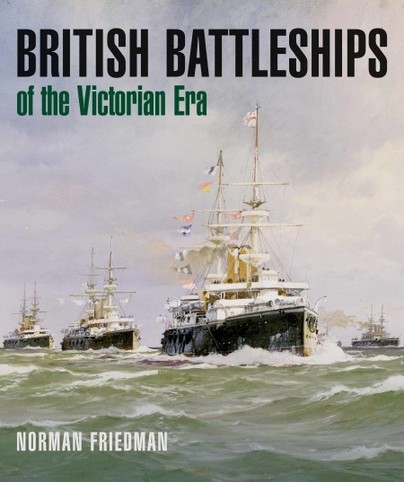 Add to Basket
Add to Wishlist
You'll be £37.50 closer to your next £10.00 credit when you purchase British Battleships of the Victorian Era. What's this?
+£4.50 UK Delivery or free UK delivery if order is over £35
(click here for international delivery rates)

This is a companion volume to Friedman’ s highly successful British Battleship 1906–1946 and completes his study of the Royal Navy’s capital ships. Beginning with the earliest installation of steam machinery in ships of the line, the book traces the technological revolution that saw the introduction of iron hulls, armour plate, shell-firing guns and the eventual abandonment of sail as auxiliary propulsion. This hectic development finally settled down to a widely approved form of pre-dreadnought battleship, built in large numbers and culminating in the King Edward VII class.

As with all of his work, Friedman is concerned to explain why as well as how and when these advances were made, and locates British ship design firmly within the larger context of international rivalries, domestic politics and economic constraints. The result is a sophisticated and enlightening overview of the Royal Navy’s battle fleet in the latter half of the nineteenth century.

It is also well illustrated – a comprehensive gallery of photographs with in-depth captions is accompanied by specially commissioned plans of the important classes by A D Baker III, and a colour section featuring the original Admiralty draughts, including a spectacular double gatefold.

Norman Friedman is one of the most highly regarded of all naval writers, with an avid following, so for anyone with an interest in warships, the publication of this work will be a major event.

This should make an outstanding reference for anyone fascinated by the design of British warships in the second half of the 20th century.

This is is very valuable volume for anyone interested in the history and development of the capital warships of the nineteenth century, particularly of the most powerful warships of Victoria’s black battle eet. It is sure to become a de nitive classic on its subject.

British Battleships of the Victorian Era is the "definitive" text on this subject and therefore falls rightfully among the milestones of naval publishing in every era and country.

This prodigious work will be come a classic and it is most strongly recommended.

The author of this superb volume is an influential American historian and analyst who has a long, sustained record of outstanding scholarship.
A comprehensive and authoritative work, this is a magnificent addition to the author's previous publications and is of the highest quality - a pleasure to handle.

There is much more to ‘British Battleships of the Victorian Era’ than your humble reviewer has managed to cover. He eschews the cliché praise words such as ‘magisterial’, ‘definitive’ etc. His recommendation to anyone who finds the maritime 19th century a source of fascination can rightly reward themselves by purchasing this quite splendid book.

This book is a worthy addition to Friedman's acclaimed series of warship studies.