Add to Basket
Add to Wishlist
You'll be £30.00 closer to your next £10.00 credit when you purchase Warships After London. What's this?
+£4.50 UK Delivery or free UK delivery if order is over £35
(click here for international delivery rates)

Order within the next 46 minutes to get your order processed the next working day!

The Washington Treaty of February 1922 put a cap on the construction of capital ships and aircraft carriers while failing to impose similar restraints on ‘auxiliary’ vessels or submarines. This led to a competition in ‘treaty cruisers’ – ships of the maximum 10,000-ton displacement allowed, armed with multiple 8in guns – and in submarines, many of which were designed for long range and high speed on the surface. During the 1920s the French and the Japanese took particular advantage of the absence of quantitative or qualitative limits for these vessels to compensate for their inferiority in capital ships. Thus, as the ten-year review of Washington approached, Britain and the United States attempted to extend the ratios agreed in 1922 to the newly-defined categories of cruisers, destroyers and submarines. The negotiations which resulted in the Treaty of London of April 1930 were fraught, and the agreement proved controversial, particularly in Japan.

Warships After London examines warship developments in the five major navies during the period 1930–1936. Long-term plans were disrupted, and new construction had to be reviewed in the light of the new treaty regulations. The imposition of new quantitative limits for cruisers, destroyers and submarines led to new, often smaller designs, and a need to balance unit size against overall numbers within each of the categories.

As ships produced under these restrictions were the newest available when war broke out in 1939, this book is a major contribution to understanding the nature of the navies involved. Its value is enhanced by well-chosen photographs and by the author’s specially-prepared line drawings showing the overall layout, armament, protection and propulsion of the ships laid down during the period.

Warships After London is a fitting sequel to the author’s acclaimed Warships After Washington, first published by Seaforth in 2011.

Review featured on The Naval Review

This book provides the reader with a good understanding the nature of the navies involved its value is enhanced by photographs and by the authors line drawings showing the overall layout.

Highly informative, with tables and diagrams of ships designs, this is a masterly exposition that is surely the book to consult on the subject.

In conclusion, this is a well-researched, well compiled easy-to-read account of the origins and capabilities of many of the warships that fought the Second World War. Highly recommended.

Both this book and its predecessor Warships After Washington should be considered highly recommended for those interested in the principal inter-war navies of the world, and practically essential when consulted in tandem with the recent policy- and industry-focused scholarship on the period. 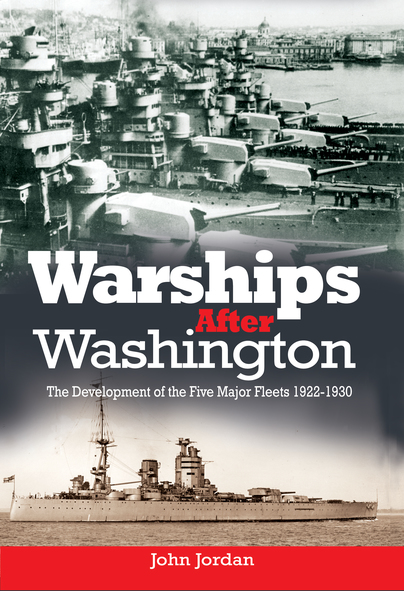 The Washington Treaty of 1922, designed to head off a potentially dangerous arms race between the major naval powers, agreed to legally binding limits on the numbers and sizes of the principal warship types. In doing so, it introduced a new constraint into naval architecture and sponsored many ingenious attempts to maximise the power of ships built within those restrictions. It effectively banned the construction of new battleships for a decade, but threw greater emphasis on large cruisers. This much is broadly understood by anyone with an interest in warships, but both the wider context of the…

Click here to buy both titles for £46.99
More titles by John Jordan