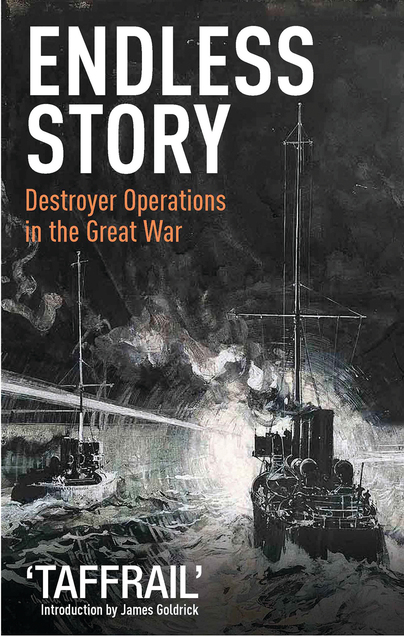 Destroyer Operations in the Great War

Click here for help on how to download our eBooks
Add to Basket
Add to Wishlist
You'll be £6.80 closer to your next £10.00 credit when you purchase Endless Story. What's this?
Need a currency converter? Check XE.com for live rates

Although it was first published in 1931, Endless Story remains the only comprehensive account of the services of the Navy’s small craft – destroyers, torpedo boats and patrol vessels – during the First World War, and moreover the only one written by an officer personally involved. Even if Dorling did not take part in all the actions he describes, he knew the men who did, and gleaned much of his information from personal contact. As a result the book has both authenticity and authority, but is composed with the all verve of the popular novelist that ‘Taffrail’ was to become. It was a bestseller in its day, and now enjoys the status of a classic.

The emphasis is on the North Sea and Channel, which saw the most famous battles, but Endless Story includes the Gallipoli campaign, warfare in the Mediterranean, ranges as far as the Pacific, where Australian destroyers were actively employed, and even pays tribute to the work of American destroyers in British waters after 1917. It also covers every kind of operation, from U-boat hunting and convoy escort, through minelaying to the Zeebrugge Raid.

This reprint will introduce one of the great books on First World War at sea to a new generation of readers.

Altogether ‘Endless Story’ is a rip-roaring tale of adventure amongst the British destroyer fleet. Despite being written in a boys-own style of the early 1930s it is replete with excellent examples of life and action while serving in small surface combatants. It should be both inspiring and a warning for officers who are currently serving on modern warships.

The book contains vivid descriptions of the arduous conditions experienced on destroyers during winter service in the North Sea and the Western Approaches. The book is completed with five appendices listing all the destroyers that served in the war plus those built and lost during the war. Despite some, by today’s standards, anachronistic attitudes and language this is an excellent read and is highly recommended.

There is no better account of the destroyer at war than this 1931 reprint by an author who fought his war as a destroyer commander.

This really is a most successful "destroyer miscellany"; the author's knowledge and wry sense of humour shines through and, given the time when it was first published his casual style is not only surprising but also means that it is so readable some eighty five years later. Certainly, it is easy to see Taffrail as one of the more swashbuckling captains of his generation; a man not best suited to service in a big ship but most certainly born to destroyer service.

A timeless classic of the war at sea in small ships.

A classic, awe-inspiring account of war at sea, reproduced in facsimile and at a very modest price.

In conclusion, this work is rightly considered to be a classic of naval history and it would be of use to anyone interested in the Destroyer-type activities of the Royal Navy and its allied services during World War I. It will be of value to those professional and amateur historians with an interest in ‘Things naval’ and the conflicts in Europe, the Middle East and the Southern Hemisphere during the period 1914-1918. In this reviewer’s opinion, it would be a valuable addition to the collection of anyone interested in such matters.
On a Rating Scale where 1: Very Poor, 10: Excellent, I would give it an 8.

'The writer has placed emphasis on the North Sea and the Channel which is only natural because destroyers and the smaller coastal forces craft were most active in these waters. He has however given a very compelling account of these vessels and their crews across what was a global conflict. This has meant that the Australian crews are particularly acknowledged in their Pacific Ocean activities, and he has paid tribute to the American destroyers which made such an important contribution later in the War. He has described eloquently the many duties that fell to destroyers in convoy escort, mine-laying and sweeping, U-boat hunting and convoy escort.

There are good images in the form of photographs and maps to support the text and the book has such a fresh feel to it that it could have been making its debut in this edition, rather than covering conflict of more than one hundred years ago.'

‘TAFFRAIL’ was the nom de plume of Captain Henry Taprell Dorling, a naval officer turned writer and journalist. Apart from a number of accounts of the Great War at sea based on his own experiences, he wrote many popular novels and from 1945 was the defence correspondence of the Observer.