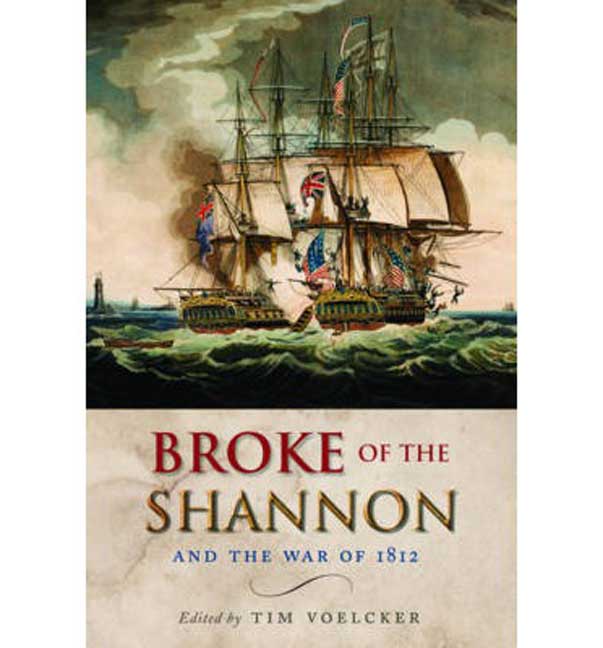 Click here for help on how to download our eBooks
Add to Basket
Add to Wishlist
You'll be £8.00 closer to your next £10.00 credit when you purchase Broke of the Shannon and the War of 1812. What's this?
Need a currency converter? Check XE.com for live rates

Captain Broke's victory in 1813 over Captain Lawrence of USS Chesapeake, which was to have far reaching influence on the future of North America, did much to restore the morale of the Royal Navy, shattered by three successive defeats in single-ship duels with US frigates, and stunned the American nation which had come to expect success.

2013 sees the bicentenary of the battle and this new book seeks to reverse the neglect shown by most modern historians of one of Britain's finest frigate captains, who by his skill, determination and leadership won one of the bloodiest naval duels the world has seen. Even now both Britain and the USA claim to have won the war but only Canada, the third country heavily involved, can fully claim to have done so, for the peace that followed established her as an independent nation.

Leading historians from all three countries have joined to give their sometimes conflicting views on different aspects in a way to interest and entertain general readers, as well as challenge academics. It is a tale of political and military blunders, courage and cowardice in battle, a bloody ship-to-ship fight, and technical innovation in the hitherto crude methods of naval gunnery. It also tells the human story of Broke's determination to achieve victory so he could return to his wife and children after seven lonely years at sea.

The near-fatal wound Broke received in hand-to-hand fighting as he boarded the Chesapeake meant that he never served again at sea, but his work on naval gunnery, paid for out of his own pocket, transformed Admiralty thinking and led to the establishment of the British naval school of gunnery, HMS Excellent. This Bicentenary year of his victory is timely for an up-to-date, wide-ranging work incorporating the latest thinking; this is the book.

As seen in the East Anglian Daily Times and the Ipswich Star.


As Tim Voelecker explains in the introduction, this 'anthology of many voices' was intended to bridge the gap between the academic world of naval history and popular naval fiction. Combining, good scholarship with an appealing presentation at an affordable price. The result is, an admirable book that succeeds in all its aims.

This is a fascinating account of a key moment in the War of 1812, supported by a range of interesting articles that provide us with the context for both the battle and the men who fought it and comes highly recommended.

Over the past several years I’ve read numerous accounts of the naval War of 1812 and this particular engagement, but this book is the first to explain how to pronounce “Broke” (said as if spelled “brook”). While most scholarly works include conclusions based on the research conducted, this book provides alternative viewpoints in hopes that readers will draw their own conclusions. Together the essays provide a well-rounded overview, rather than looking at the subject in a bubble, and in doing this, the editor has achieved his four-fold goal.

While most scholarly works include conclusions based on the research conducted, this book provides alternative viewpoints in hopes that readers will draw their own conclusions. Together the essays provide a well-rounded overview, rather than looking at the subject in a bubble, and in doing this, the editor has achieved his four-fold goal.

The authors sharp relevance, spite and humour is insightfully reviewed and often beautifully illustrated in either black and white or colour, together making a major contribution to the book's appeal. Davey's skillful assessment is supplemented later in the book by Richard Wilson's consideration of some appropriate contemporary ballads, poetry and music.

The book itself is well-produced, weighty and a pleasure to handle, being printed on good quality paper, facilitating especially the excellent colour illustrations. Altogether, this is an absorbing read, at a remarkably competitive price.

An excellent collection of essays on a naval hero of the War of 1812, his ship and a famous engagement. I highly recommend it to readers interested in the naval side of the conflict or maritime warfare in the early 19th century.

Tim Voelcker set out to reverse the neglect shown by historians to one of our finest frigate captains and a man who revolutionised the naval gunnery of this period. With this fine book he has achieved his declared aim.

This book is well worth reading by all those interested in the age of sail.

A welcome addition to the cannon of maritime literature.