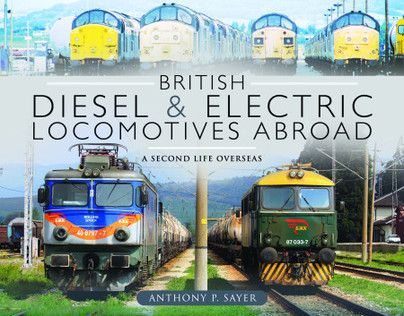 Add to Basket
Add to Wishlist
You'll be £30.00 closer to your next £10.00 credit when you purchase British Diesel and Electric Locomotives Abroad. What's this?
+£4.50 UK Delivery or free UK delivery if order is over £35
(click here for international delivery rates)

This book was originally envisaged as a purely photographic overview of those British main-line diesel and electric locomotives which managed to find further useful employment across Europe after completion of their careers in the United Kingdom. However, such was the quantity of information collected regarding these exported locomotives and their operational deployment over the past twenty years that the scope of the book was expanded to incorporate both the factual and the pictorial into a detailed history of these locomotives. The geographical use of the locomotives is surprisingly extensive including France, the Netherlands, Spain, Italy, Kosovo, Hungary, Romania, Bulgaria and Croatia in the twenty years since 1998.

A significant amount of exclusive factual information and over 200 previously unpublished photographs combine to provide a comprehensive insight into the British locomotives now finding a second life overseas, including coverage of Class 37, 56 and 58 locomotives on high-speed line construction work in France, Class 37 mishaps in Spain, Class 86s on their day of arrival in Bulgaria, and various types of a.c. electric locomotives in their new "natural habitats" across Eastern Europe.

This could have been a simple but nevertheless interesting photo album, but has become much more, and represents a considerable amount of research and compilation. Fascinating stuff.

Many enthusiasts will assume that the disappearance of much BR diesel and elecric motive power during the privatisation era means that these locomotives have gone to meet their maker and have now ended up as razorblades. In fact, significant numbers have been sold on or leased for further use on the rail systems of continental Europe. This excellent volume catalogues and illustrates locos that went on to serve in half a dozen countries in more or less recognizable form, sometimes wearing rather garish liveries or dwarfed by their continental cousins built to a more generous loading gauge. So if you have ever wondered what a class 86 or 56 would look like in black, a 58 in all-over yellow or an 87 on a three coach train, this is your chance. Anthony Sayer has brought together over 200 full colour images taken in such widely-spread locations as Romania, Spain and Bulgaria, while several photos show use of a squad of class 37s on railway construction work in France and Italy and a solitary 47 in Hungary.

A fresh work that will help revitalize our railway library.

Book on diesel and electric locomotives that after completing their careers in the United Kingdom found employment in other European countries such as Frances, the Netherlands, Spain, Romania, Bulgaria, etc., in the last twenty years.

A book with an extensive photographic journey (almost 290 images), complemented by a wealth of information, about the UK locomotives found in Europe, especially working on the construction of high-speed lines. To highlight the 60 pages that he dedicates to the locomotives of classes 37 and 58 that have been working in Spain.