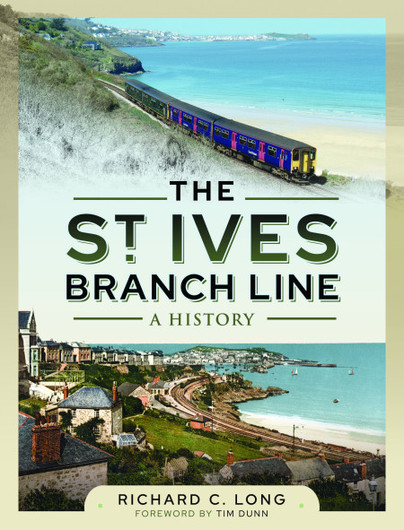 Preorder
Add to Wishlist
You'll be £22.50 closer to your next £10.00 credit when you purchase The St Ives Branch Line: A History. What's this?
+£4.50 UK Delivery or free UK delivery if order is over £35
(click here for international delivery rates)

In 1963 comic duo Flanders and Swann composed Slow Train - a lament for some of the many railway lines proposed for closure by Dr Beeching. Among the destinations listed in their song is the refrain “from St Erth to St Ives”. Constructed in 1877 as the last broad gauge line to be built in the UK, the St Ives branch did not close in the 1960s and survives to this day – now widely regarded as one of the most scenic railways in Europe. How did it escape closure, and how did it come to be built in the first place?

Why did the war departments of the world have their eyes on St Ives in the years before the First World War? How did a town once renowned for the inescapable smell of fish become one of the most popular tourist resorts in the UK? Did the Great Western Railway invent the Cornish Riviera? Why was a heliport proposed for St Erth? Where did a 32-ton ballast digger end-up in 2008? And how did two young men find themselves four miles from the nearest station in 1860…?

Containing over 100 images, mostly in colour and many never published before, this book sets out to answer these and many more questions.

Describing himself as a "full-time dad and part-time writer", life-long railway enthusiast Richard Long was born in Hampshire in 1972 and has lived in East London for the past two decades. A history graduate and former bookseller, he has written a number of books about railways in the south of England, including Ryde Rail: A History of Tube Trains on the Isle of Wight.

As a regular visitor the West Country, and to St Ives in particular, Richard has long been fascinated by the town, its history and its spectacularly scenic branch line.