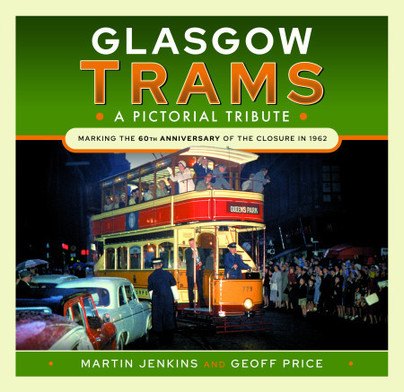 Preorder
Add to Wishlist
You'll be £27.00 closer to your next £10.00 credit when you purchase Glasgow Trams. What's this?
+£4.50 UK Delivery or free UK delivery if order is over £35
(click here for international delivery rates)

This book has been commissioned to mark the 60th anniversary of the closure of Glasgow’s remarkable tram system, when over 250,000 people lined the city streets on 4 September 1962 to watch a final procession of some 20 trams representing different periods in the history of the undertaking. Using a wealth of previously unpublished photographs, the book shows as many areas and aspects of the city as possible. The trams are once again back where they belong, right in the heart of the city and its suburbs with people, period buses, cars and lorries, shops, churches, theatres, cinemas, parks, shipyards, factories and even steam and electric locos running on the tram tracks. Furthermore, the coverage goes way beyond the city boundary to encompass Airdrie, Coatbridge, Cambuslang, Rutherglen, Barrhead, Paisley, Renfrew, Clydebank and Milngavie. Over the years many locations have changed beyond recognition whilst others remain instantly recognisable. There are scores of photographs of the long-lasting Standards (some even in Glasgow’s legendary coloured route bands), trams acquired from Paisley including those cut down to single-deckers, Kilmarnock bogies, modern Coronations and Cunarders, ex-Liverpool cars, one-offs and also works cars. For those who still remember the trams, we hope you enjoy looking back as much as we have and for those who have no memory of wires and rails in the street, we hope this will recapture a lost way of life when services were frequent and fares relatively inexpensive.

GEOFF PRICE was born on Merseyside, with his life-long interest in trams beginning at 9 months of age (Llandudno). A published author, his varied working life has included advertising (agency and newspapers), property valuation and road passenger transport. He is a former parish councillor and primary school governor. He was captivated by Glasgow’s trams, belatedly, in 1961 and, as a former chairman of the Merseyside branch of the Tramway & Light Railway Society, developed their monthly meetings into successful gatherings for a wider audience interested in transport generally.