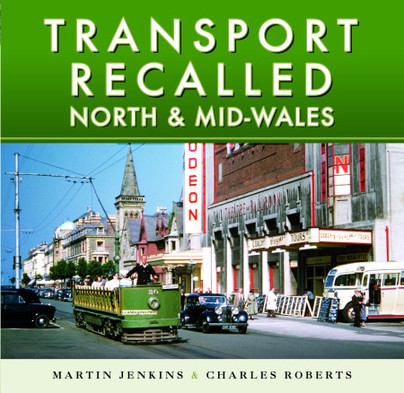 Add to Basket
Add to Wishlist
You'll be £27.00 closer to your next £10.00 credit when you purchase Transport Recalled: North and Mid-Wales. What's this?
+£4.50 UK Delivery or free UK delivery if order is over £35
(click here for international delivery rates)

This book takes readers on a spectacular journey across North and Mid-Wales in the thirty-year period from the mid-1950s onwards. In full colour, it features scenic railway main lines and branches; ports, canals and shipping including the Liverpool & North Wales Steamship Company; cable and electric tramways; all manner of connecting bus and coach services in urban and rural settings; and a few surprises along the way. Highlights include superb views of the trams owned by Llandudno & Colwyn Bay Electric Railway; long-gone branch lines; much-loved locomotive types; very rare colour views of some Crosville bus types; and a remarkable assembly of horse drawn, steam-powered and electrically-operated narrow gauge railways which survived in industrial locations barely changed in well over a century. These include the imposing slate quarry settings of Dinorwic and Penrhyn, recorded by intrepid photographers, who captured the arduous and dangerous working conditions of the miners as well as the hustle and bustle of the internal rail systems and their links to the coastal ports. The historic nature of these sites has now been recognised globally, with the awarding of UNESCO World Heritage status to the Slate Landscape of Northwest Wales. With the authors drawing on their own early personal memories, this book should evoke nostalgic memories for local residents as well as for those who were fortunate enough to have holidays or arrive as day-trippers. It will also hopefully encourage today’s travellers to seek out the spectacular coastlines, dramatic hills and mountains, rolling countryside and farmland – not to mention the Great Little Trains of Wales – for which the region is renowned.

As featured in the article: 'Look back in Bangor: Memories of steamship trips to North Wales'

CHARLES ROBERTS was born in Wirral, Merseyside, and worked in the bus industry in London, the Midlands and the North East. From 1989 until 2017, he lectured in transport and logistics subjects at Liverpool John Moores University, latterly heading the MSc and BSc programmes in Maritime Management and Logistics. A keen and much-travelled transport enthusiast and photographer, he is currently the Chairman of Online Transport Archive, and has co-authored a range of books based on material held by the Archive.