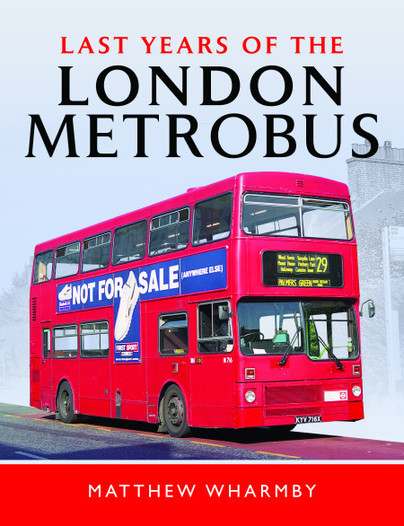 Add to Basket
Add to Wishlist
You'll be £21.00 closer to your next £10.00 credit when you purchase Last Years of the London Metrobus. What's this?
+£4.50 UK Delivery or free UK delivery if order is over £35
(click here for international delivery rates)

Mainstay of London Buses Ltd’s fleet into the 1990s, London’s MCW Metrobus fleet of M class remained almost completely intact by the time of privatisation in the autumn of 1994. In the hands of seven new companies thereafter, there followed multiple new liveries and new identities, but it wasn’t until the end of the decade when this account takes up their story, that withdrawals commenced in the face of new low-floor double-deck buses. Even then, the venerable M class remained a solid option for second-hand purchases, allowing examples to remain into service past their twentieth birthdays.

Between 1998 and 2004 the M fleets of Arriva London North and South, First Capital and Centrewest, London General, London United, Metroline and Metroline London Northern and a host of smaller London contractors dwindled until the last examples, lingering on school routes for Leaside Travel, signed off at the beginning of 2006.

This 192 page book of mostly colour images of the Metrobus in its London setting features all the various liveries worn by the class before the advent of all-over red. Featured are the lovely combination of red and blue found on Metroline, the various London United reds and greys, First’s red and yellow and the earlier all-over yellow of Capital Citybus. There are also buses in Arriva’s provincial livery, and those of several independents. The result is a feast of colour, much of it bright sunshine, and a fine of record of the era around the end of the last millennium. Highly recommend for all those with a passion for the London scene.

Another interesting work with which to increase our excellent transport library.