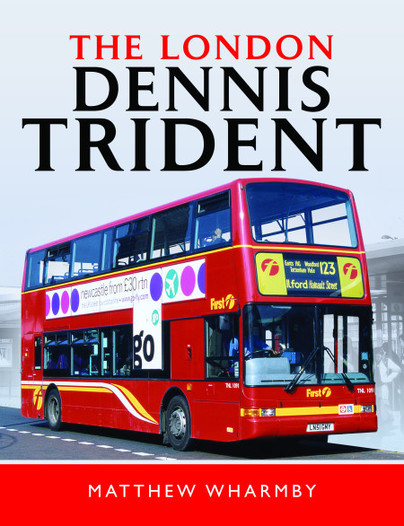 Add to Basket
Add to Wishlist
You'll be £24.50 closer to your next £10.00 credit when you purchase The London Dennis Trident. What's this?
+£4.50 UK Delivery or free UK delivery if order is over £35
(click here for international delivery rates)

Propelled towards the end of the 1990s by accessibility imperative requiring low floor buses both in London and the rest of Britain, Dennis developed a tri axle Trident double decker for Hong Kong and then adapted the design as a two axle version for Britain.

Orders came thick and fast between 1999, when the first Tridents for London entered service with Stagecoach and 2006, when the Enviro 400, a combination of its unified body builders, replaced it.

The body work was by Alexander ALX400, Plaxton, (Precedent) and East Lancs, to two available lengths,

while badging itself progressed although Trans Bus, until this troubled organisation was suspended in 2004 by todays Alexander Dennis.

Versatile and personable, the Trident in all its forms lasted two decades in London, the last examples being withdrawn from service in 2020.


As featured in 'A salute to two London giants'

For more than ten years around the turn of the millennium, the Dennis Trident double deck bus chassis was one of the best selling in Britain, and examples can still be seen in regular service up and down the country, including many that were bought new for service in London.

This book tells the story of the London fleets, which were mainly bodied as Dennis’s own ALX400 and as Plaxton Presidents. A much smaller number carried bodies built by East Lancs to the Lolyne or Myllennium Lolyne designs. London bus specification required two chassis lengths and dual passenger doors, the latter feature often being removed before vehicles were cascaded into provincial fleets outside the capital. About 260 of the book’s 280 pages are used to describe the 15 London bus companies which operated Tridents, including the most familiar such as Stagecoach, First, Metroline and Go-Ahead, with the remainder devoted to more specialist concerns such as the tour operators. The author provides a good account of how each fleet of Tridents was used by its respective operator, including allocation to individual routes and the variations between batches of vehicles, such as those which were delivered with spiral staircases.

Those who think that London buses wear an unrelieved red livery will find that the truth is rather different, or was so at the time that many of the vehicles pictured were captured. We find the orange and blue swirls of Stagecoach, the blue skirts of Metroline and the similarly-placed grey of London United, the yellow and white willow leaves of First, and examples of many of the all-over advertising liveries worn by many buses. We also see the striking blue and yellow of the Metrobus fleet. The book is well printed in full colour on good quality paper, and apart from a very small number of rather dull images, the photos are an object lesson in clarity, with many taken in full sunlight.

This book is a worthy addition to the library of devotees of the recent London transport scene.

"The author has built up a niche detailing the changes in types and routes, and London bus historians will welcome this addition. It is a well presented and readable book."