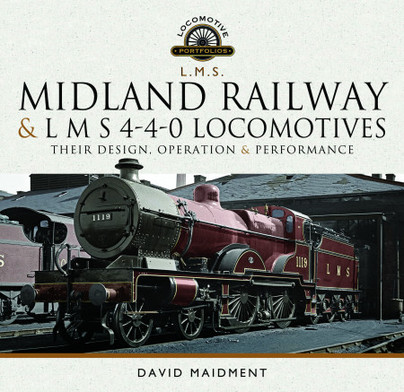 Click here for help on how to download our eBooks
Add to Basket
Add to Wishlist
You'll be £16.99 closer to your next £10.00 credit when you purchase Midland Railway and L M S 4-4-0 Locomotives. What's this?
Need a currency converter? Check XE.com for live rates

David Maidment has unravelled the complex history of the Johnson, Deeley and Fowler 4-4-0 locomotives of the Midland Railway and its LMS successor, covering their design, construction, operation and performance in this book with over 400 black and white photographs. It recounts their working on the Midland main lines from St Pancras to Derby, Manchester, Leeds and Carlisle, the latter via the celebrated Settle & Carlisle line, and the later work of the Fowler LMS engines on the West Coast main line. The book also describes the history of the Midland 4-4-0s built for the Somerset & Dorset and Midland & Great Northern Railways. The book covers the period from the first Midland 4-4-0 built in 1876 to the last LMS 2P withdrawn in 1962 and includes performance logs, weight diagrams and dimensions and statistical details of each locomotive.

The Society of Model and Experimental Engineers Newsletter - June 2022

"This is another excellent book that should have wide appeal especially to those of a Midland or LMS persuasion."

"There are numerous photos, many from the Manchester Locomotive Society collection."

Another book in this great series. An in-depth look and analysis of the locomotive power of the Midlands Railway.

This a must have for the enthusiast

"This is another beautifully presented work from Pen & Sword, and is highly recommended."

As previously a major plus of this book are the photos – there are very many period shots, ranging from official works pictures to views of the locos in action, all reproduced to a large format and high standard – anyone recreating one of these locos in miniature will find great help in these pictures and indeed the book as a whole.

In conclusion this is an impressive book that will find pride of place on the bookshelves of railway historians and railway model makers alike. An essential guide that is highly recommended.

This is another great book by David Maidment..covering in depth the engines of the Midland Railway.

A must have for the rail enthusiast. Highly recommended