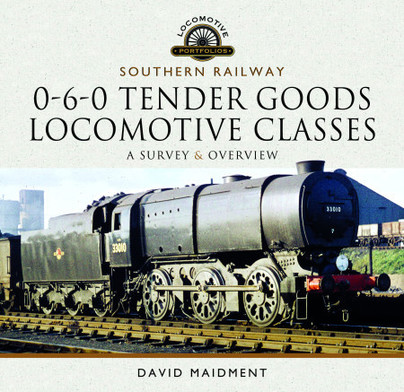 Add to Basket
Add to Wishlist
You'll be £24.00 closer to your next £10.00 credit when you purchase Southern Railway, 0-6-0 Tender Goods Locomotive Classes. What's this?
+£4.50 UK Delivery or free UK delivery if order is over £35
(click here for international delivery rates)

This is a book that looks at the 0-6-0 tender goods locomotives of the Southern Railway, from the steam locomotive classes taken over at the railway grouping in 1923, through to the two classes introduced during Southern Railway days, that of the Q and Q1 classes.

The Southern Railway had a rich and varied number of 0-6-0 tender goods classes, originating from all three former main line pre grouping companies, many of them lasted until the late 1950s and early 1960s.

Many of the older Victorian and Edwardian classes of locomotive taken over in 1923, did not last very long with the new company, but are covered here for historical and modelling interest.

An interesting and superbly documented book.

As with the other books in this series this one is well-produced and deals with its subject matter in a stylish and authoritative manner. For all it is a useful addition to our stock of railway literature, for Southern enthusiasts it ought to be a delight! Well recommended.
****

The book is to the usual extremely high standard that we have come to associate with Pen & Sword publications. It comes with the highest recommendation.

Paul E Davies, The Journal of the Friends of the National Railway Museum - Summer 2021

This books is highly recommended and fills an important gap in the published histories of many of the unglamorous but long-lasting locos that kept Southern England’s freight traffic moving throughout the period from the late 1880s to the 1960s.

Packed with photographs and specialist knowledge, this will appeal to railway buffs and train modellers alike.