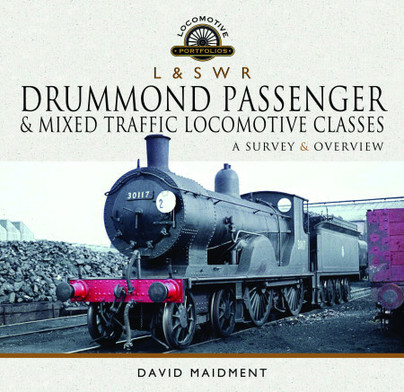 Add to Basket
Add to Wishlist
You'll be £31.50 closer to your next £10.00 credit when you purchase L & S W R Drummond Passenger and Mixed Traffic Locomotive Classes. What's this?
+£4.50 UK Delivery or free UK delivery if order is over £35
(click here for international delivery rates)


This book is particularly heavy on photo content, almost all period shots of the various classes at work, all very well reproduced and likely to be a great aid to model engineers reproducing these locos. Southern Railway fans in particular will enjoy this book.

"In summary, this is a highly-recommended account of Drummond’s principal passenger locomotives."

Being a North Midlander locomotives of the railways of the south tend to be a bit of a mystery to your reviewer. This book goes a long way to revealing that mystery. It is an excellent source of reference and comes, as with previous Portfolios by this author, very highly recommended.

A very well documented work with a magnificent visual archive.

If you are in the everyday use of the locomotives and images of them in action, particularly in the pre-grouping and grouping periods, then this is the volume for you.

David Maidment continues his surveys and overviews by looking at Dugald Drummond’s passenger and mixed traffic locomotives which were first used on the London & South Western Railway. Highly recommended.

This is yet another thorough and entertaining read, and as ever all the royalties go to the Railway Children charity.