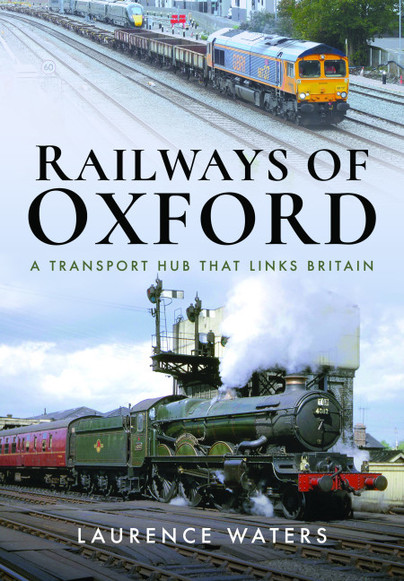 Add to Basket
Add to Wishlist
You'll be £22.50 closer to your next £10.00 credit when you purchase Railways of Oxford. What's this?
+£4.50 UK Delivery or free UK delivery if order is over £40
(click here for international delivery rates)

Order within the next 2 hours, 23 minutes to get your order processed the next working day!

The book is copiously illustrated with some particularly good images from the C19 and early C20. The author is honourary photographic archivist to the Great Western Trust at Didcot Railway Centre and his knowledge of early railway photography is unsurpassed.

The book, written by well known railway author, Laurence Waters, has been produced in a handy size and within its 224 pages and eight chapters, succinctly covers what at times, was a complicated history of the railways in and around the city of Oxford.

Taking the reader from the early history of the Oxford branch promoted by Brunel, the trials and tribulations of 'Town and Gown' (Similar to those the great man faced with Eaton College) to the opening in 1844. From then on, other companies saw Oxford as a worthy goal or as part of a route avoiding the GWR broad gauge monopoly to London, indeed with trains running to the LNWR terminus at Euston. Subsequent chapters indeed cover the LNWR and their adjacent Rewley Road station, whilst a further chapter covers the main GWR station in some depth.

The author then strikes out on to cover the immediate branch lines which fed in to the mainline, covering each well before looking at the Engine sheds, Goods department and passenger services. The whole is well illustrated with both period (some in colour) and more modern views, covering the ever changing scene. Some of those taken in the last 10-15 years, show liveries which themselves, are now memories so fast are the changes .Some of the steam era photographs I had not seen before and is testament to the authors ability to source illustrations from the vast archive held by the Great Western Railway Society at their Didcot headquarters.

The book is written in an easy to read and understand style and seems to have been well edited and proof read which makes a refreshing change these days, my only comment is with regard to the caption to the upper photograph on page 127 it not being a parcel wagon, but a horse box.

An excellent record of both the lost and current railway scene in the 'City of Spires' and to be recommended.

This is a beautifully presented book printed on glossy paper and illustrated by many quality black and white and colour images, featuring not only trains but a selection of early large scale Ordnance Survey maps, historic handbills and notices. For those wanting a concise and very readable account of Oxford’s railways through the years, this book is sure to find a place on their shelves.