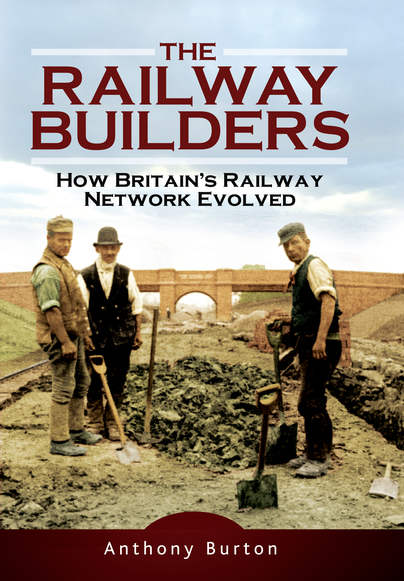 Add to Basket
Add to Wishlist
You'll be £13.99 closer to your next £10.00 credit when you purchase The Railway Builders. What's this?
+£4.50 UK Delivery or free UK delivery if order is over £35
(click here for international delivery rates)

There are many books on railway history, but few publications on how railways were constructed. Railway Builders tells the remarkable story of how the promoters, engineers and contractors worked together to build the national network. It is also the story of the extraordinary army of men who did the hard, physical work – the railway navvies. These itinerant workers lived rough and were capable of immense feats of physical strength as they dug their way from one end of the country to the other.

There are many familiar names here, such as George and Robert Stephenson and Isambard Kingdom Brunel, but the book also looks at many lesser-known engineers and the great contractors, such as Thomas Brassey, who employed an army of navvies as large as the regular armies of some countries. This is a tale of how such great works of engineering, like the Forth Bridge, were constructed but also of disasters, such as the collapse of the Tay Bridge. It all makes for an epic tale of how, with very little help from machinery, the Victorians created a great rail network. The book was first published in the early 1990s and has been out of print for some years.

First published in 1992 and out of print for some years, Pen & Sword have done a great service in bringing out a second edition of Anthony Burton's book telling the remarkable story of how the promoters, engineers and contractors worked together to build the national railway network.

A fascinating readable account of railway construction including some disasters, this book will appeal particularly to historians with an interest in transport or railway ancestors in the 19th and 20th centuries.

Anyone with ancestors involved in any capacity in the early days of the railway will find this book an invaluable insight into their lives.

There is no shortage of books on the history of Britain's railways, or indeed of people ready to complain about their decline, but this title focuses more interestingly on the process of building the network in the first place.
The book has a fascinating set of black and white plates showing some of this work in progress. This book was first published in 1992, then fell out of print. It firmly deserves this new edition, an excellent study of how the railways changed the face of Britain.

' This book offers a valuable perspective on a major aspect of Britain's history.'