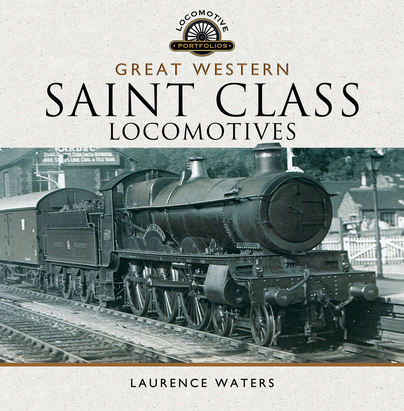 Add to Basket
Add to Wishlist
You'll be £25.00 closer to your next £10.00 credit when you purchase Great Western Saint Class Locomotives. What's this?
+£4.50 UK Delivery or free UK delivery if order is over £35
(click here for international delivery rates)

Churchward’s 2 cylinder Saint Class 4-6-0s were arguably one of the most important locomotive developments of the twentieth century. The seventy-seven members of the class were so successful that most of the other railway companies in this country used the same 2 cylinder 4-6-0 formula in the design of their own mixed traffic locomotives. Over the years the Saints saw a number of modifications, with many of the class passing into BR ownership. The last member of the class, no. 2920 Saint Martin, was withdrawn from service in 1953 and was sadly not preserved. However, the Great Western Society are now constructing a replica Saint at Didcot Railway Centre. Numbered 2999 it will be named Lady of Legend.

In this book author Laurence Waters charts the remarkable history of the class from the construction of the prototype Saint at Swindon in 1902, right through to the final withdrawals in 1953. Using many previously unpublished black and white photographs, accompanied by informative captions, each member of the class is illustrated. This book should appeal to those interested in the history of Great Western Locomotive development as well as modellers of the Great Western and Western Region.

Barnsley based publishers Pen & Sword are relatively new into the transport publishing field, but in this reviewer's eyes are already establishing an excellent reputation. The book is very well produced and attractively presented.
Both author and publisher are to be commended on and interesting and useful book at an attractive price.

The author gives us a readable general history.

A very interesting book and an impressive photo archive.

Pen & Sword's Locomotive Portfolios series continues to impress and the latest releases are among the best so far. Top of the bill for GWR enthusiasts has to be the magnificent volume on the 'Saint' class 4-6-0's by society archivist Laurence Waters.

This is one book you won't want to be without.