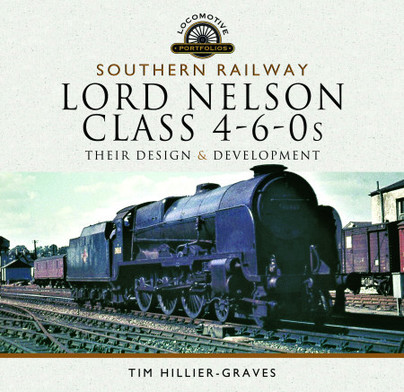 Add to Basket
Add to Wishlist
You'll be £15.00 closer to your next £10.00 credit when you purchase Southern Railway, Lord Nelson Class 4-6-0s. What's this?
+£4.50 UK Delivery or free UK delivery if order is over £35
(click here for international delivery rates)

The Lord Nelson Class has come to be viewed as an ‘also ran’ amongst express locomotives and is largely overlooked for that reason. It had the misfortune to be sandwiched on Southern metals between the classic and much revered King Arthurs and Schools and by Bullied’s controversial Pacifics. In such company any design might suffer by comparison. And yet when first appearing they attracted plaudits from railway professionals, including the footplate crew, and the public alike. But with only 16 being built their impact was muted and any faults in their design were magnified beyond their actual impact. In truth they deserved far better than this and were, in fact sturdy, reliable performers that served the company well on the heavy boat trains for which they were designed and across their other passenger services for 30 years and more in peace and war.

Much has been written about these locomotives but no story is ever complete, with new information and photographs emerging to deepen our understanding of them. This book provides an in depth view that re-examines these impressive engines using, new material, eye witness accounts, contemporary assessments and more than 200 photographs and drawings.

As usual, impeccable documentation that makes any work of the Series "Locomotive Portfolios" have a privileged place in our railway library.

The author has researched the class well and included a comprehensive record of each engine, it's a well-written history of the Southern's most powerful 4-6-0 design.

...A useful addition to the bookshelves...

As a small class of only 16 locos, the Lord Nelsons were sometimes overlooked when compared with their more famous Maunsell and Bulleid stablemates. They must also be seen against a background of the Southern’s heavy concentration of its financial resources on its electrification schemes. This interesting work sets them in context and traces the evolution of the class, the development of the prototype and the story of class members in traffic up to the end of their days.

One of the most enlightening parts of the book features the story of the Southern’s internal politics, and how Maunsell set about managing the CME’s department, giving each of his senior managers clearly defined responsibilities and with a relentless emphasis on managing costs. It is clear that two of the most influential names in the development of the Lord Nelsons were in fact James Clayton and Harold Holcroft, who rarely receive the credit which they deserve.

Those with an eye for technical detail will appreciate the author’s inclusion of drawings and plans (including some nice contemporary colour illustrations) and details of the performance of the prototype when under test. We hear that problems soon became apparent with heavy coal consumption, which Maunsell put down to firemen not mastering the special technique needed with a split level grate, and that he felt comparisons between the Nelsons and King Arthurs were not comparing like with like. After Bulleid took over as CME, several modifications to the class were made and these are described in full.

As well as numerous photographs from the Southern and BR eras, the author has included an appendix giving a lot of information on individual class members, with several eye-catching images of the locos at work on their day to day duties.

This is another worthy addition to Pen & Sword’s Locomotive Profile series.