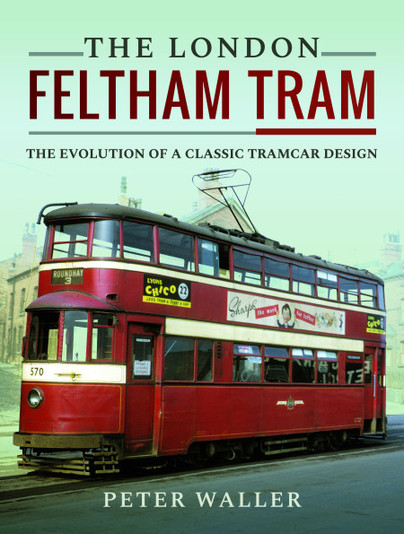 The Evolution of a Classic Tramcar Design

Add to Basket
Add to Wishlist
You'll be £25.00 closer to your next £10.00 credit when you purchase The London Feltham Tram. What's this?
+£4.50 UK Delivery or free UK delivery if order is over £35
(click here for international delivery rates)

By the late 1920s the existing trams operated by both the Metropolitan Electric Tramways and the London United Tramways were increasingly aged. Although the long-term future of the tramways was open to doubt, the two operators co-operated in the development of one of the most important types of tram ever built in Britain – the ‘Feltham’. Conceived following detailed research and the construction of a number of prototype cars – facets covered in the book – the production ‘Felthams’ all entered service by the early 1930s. However, the LPTB’s plans for converting tram routes to trolleybus operation soon saw these modern cars transferred from north of the River Thames to south of the river. Here the production cars mostly survived until the final conversion programme; this was not the end of the story, however, as the majority were sold for further service to Leeds, where the last survivors were to see the final closure of the West Riding system in November 1959. The book explores the story of the ‘Felthams’ in London, Leeds and Sunderland where the unique centre-entrance car – MET No 331 – was to operate following withdrawal in the metropolis.

"The final book in this related set covers the Feltham tram. I was lucky enough to ride on some of these vehicles after their transfer to Leeds and therefore have looked at this book with interest. It is a good survey with a blend of informative text matched with a plentiful selection of mostly mono images. Well bound and printed on quality paper it is, like the others, easy to handle and read. I would have liked some of the images to have been tweaked a little to add more contrast. Given my childhood interaction with these vehicles, it is one I think I may well buy for my personal library, therefore is one I can definitely recommend if trams are of interest to you."

'A welcome addition to the bookshelf'.

Peter Waller examines some of the types of tram designs to have operated in the British Isles. This is the first book of a series and looks at the Feltham trams used in London, Leeds and Sunderland . Highly recommended.

As is to be expected, the story is copiously illustrated, and the photos have been remastered, making them look better than their age would expect. As is often the case in this type of book, the background of the photos tells a story as well, with streets devoid of motor vehicles and unfamiliar formal fashions. It is 70 years since these trams last graced the streets of London, and younger members may be fascinated by this story of transport from a completely different era.

This book is about the tram "Feltham" which is one of the most important trams in Britain. It was designed and built in the early 1930s by Metropolitan Electric Tramways and London United Tramways to replace its old trams. In London they were replaced by trolleybus lines but continued to serve in Leeds and Sunderland.

Another great book by tram expert Peter Waller. It has a lot of information and good photographs to get to know this old tram model, which has become an icon. To complete this book, the book "London Transport" by the same author should also be read.