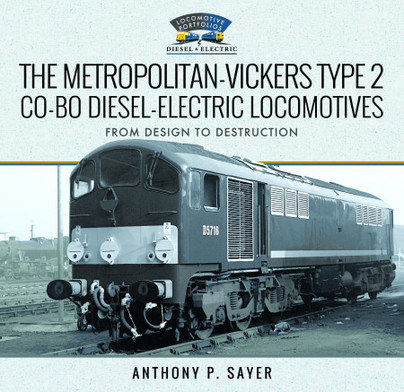 From Design to Destruction

Preorder
Add to Wishlist
You'll be £36.00 closer to your next £10.00 credit when you purchase The Metropolitan-Vickers Type 2 Co-Bo Diesel-Electric Locomotives. What's this?
+£4.50 UK Delivery or free UK delivery if order is over £35
(click here for international delivery rates)

This book provides an in-depth history of the Metropolitan-Vickers diesel-electric Type 2 locomotives, more frequently known collectively as the “Co-Bo’s” due to their unusual wheel arrangement. Twenty locomotives were constructed during the late-1950s for use on the London Midland Region of British Railways.

The fleet was fraught with difficulties from the start, most notably due to problems with their Crossley engines, this necessitating the need for extensive rehabilitation work during the early-1960s. Matters barely improved and the option to completely re-engine the locomotives with English Electric units was debated at length, but a downturn in traffic levels ultimately resulted in their demise by the end of 1968 prior to any further major rebuilding work being carried out.

Significant quantities of new archive and personal sighting information, supported by over 180 photographs and diagrams, have been brought together to allow dramatic new insights into this enigmatic class of locomotives, including the whole debate surrounding potential re-engining, their works histories, the extended periods in storage, together with in-depth reviews of the various detail differences and liveries.

... this is a really excellent book. It covers, in tremendous detail, a niche in railway history that could have remained unremarked for a long time. If nothing else it answers the reviewer’s long-held query about the asymmetric power bogies! Highly recommended.

Analysis and documentation in its purest form.

Following on from the excellent book by the same author on the North British Class 21/29 locomotives, this book takes a look at the equally troublesome Class 28s, typically called the Co-Bos. The book follows the same format as the previous book, with in depth research into the class from concept, development to service introduction and troubles in service. There is a complete list of the allocations and livery details as well as withdrawal and scrappage details for each member of the rather short lived unsuccessful class. Another fascinating read about a class I didn’t previously know a great deal about.

The book is well researched, well written and wonderfully illustrated with copious quality archive photographs, including a good selection from the Cumbrian region. Most are in black & white, with a few in colour as well. All in all, if you have more than a passing interest in these locomotives and their time in Cumbria, then this book is to be highly recommended.

The author has provided a plethora of technical details, dates and locations about all the members of this enigmatic and sadly problematic class of diesels, that many enthusiasts probably wish they had seen more of. This is the reference book that tells us everything we need to know.
Production quality of the book is, as always with Pen & Sword, excellent.

Clearly, this is a labour of love that aims to be the last word on the subject - although it comes at a price.

A highly recommended work, especially for those with an interest in the early years of BR diesel traction.

The text is deeply researched and rich in detail – all backed up with an impressive collection of mostly black & white images showing the locos at all stages of their careers... This book should prove to be a useful reference source for years to come, making it well worth the price.