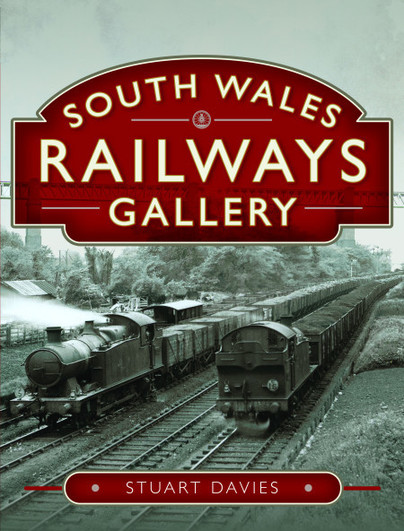 Preorder
Add to Wishlist
You'll be £27.00 closer to your next £10.00 credit when you purchase South Wales Railways Gallery. What's this?
+£4.50 UK Delivery or free UK delivery if order is over £40
(click here for international delivery rates)

At its peak, the South Wales railway network was one of the most complex in the world. Its primary purpose was to transport Coal from source to point of consumption or export via the various docks. To this was added the other raw materials necessary for making Iron and ultimately Steel, together with the respective products of that industry.

True, there was no glory in this day to day phenomenon and as a consequence, the area has been poorly represented in the annals of the British railway network. Even that paragon of railway publicity the Great Western, found easier plums to pick elsewhere on its system. However, in addition to the GW, the area was a magnet for the London & North Western, the Midland Railway and not to be forgotten, the 15 indigenous companies.

Yet, in terms of traffic, engineering enterprise, operating practices and locomotive types, the area boasted an unequalled variety which this book attempts to reflect. Many of the photographs have not been published before and capture an essence of the variety to be found. The captions contain extensive details to supplement the photographic record enabling a more comprehensive appreciation and understanding of what was involved.

It is difficult to appreciate the railway was once a “Common Carrier” obliged to convey any consignment offered. Even though Coal was predominant other traffic, including the more unusual, are also featured; Although of secondary importance in regard to revenue, Passenger services were carefully dovetailed into the intensive freight operation and matched any other location’s provision.

After the 1923 Grouping, the GW became the major player in South Wales. It absorbed all 15 of the independent companies and further extended its policy of standardisation. Nevertheless, where the smaller companies demonstrated good practices, these were embraced. The L&NW and MR elements became LMSR but still remained far flung tentacles from the parent. All this is recognised here albeit in proportion.

The Gallery aims to provide a flavour of what the railways of South Wales had to offer and enlighten the reader as to its major part in the national network.

Stuart Davies is a native of the Ogmore Valley and spent much of his formative years observing the operations at Tondu depot and its associated railway environs. This inspired him to pursue a railway career based initially in South Wales, then Carlisle, Bristol, East Anglia and the West Midlands, finally becoming a Senior Operations Executive.