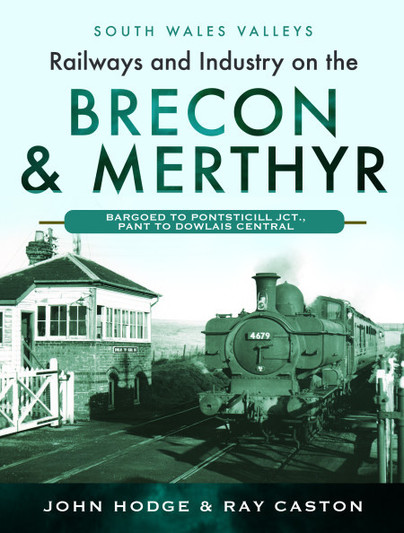 Railways and Industry on the Brecon & Merthyr (Hardback)

Preorder
Add to Wishlist
You'll be £22.50 closer to your next £10.00 credit when you purchase Railways and Industry on the Brecon & Merthyr. What's this?
+£4.50 UK Delivery or free UK delivery if order is over £40
(click here for international delivery rates)

This book on the Brecon & Merthyr, deals with the section from Bargoed to Pontsticill Junction, covering the line built by the B&M to join onto the section running north from Bargoed built by the Rhymney Railway, much dominated at the time by nearby Dowlais Ironworks. Included is the short section from Pant to Dowlais Central. It contains photographs of every location along the line, including many that have not before been published. The volume includes a fascinating account of the Pantywaun Marshalling Yard, operative until Dowlais Ironworks ceased production, when the B&M ran freight services to and from Pantywaun, before the many collieries and levels in the area were closed almost overnight and the location finally obliterated under the development of Cwmbargoed Opencast.

Ray Caston is a former chemist, working for Monsanto’s at Newport. He has lifelong association with the B&M where his father and grandfather were both employed. He has lived all his life at Bassaleg where he is a local councillor. Since 1970 he has maintained a continuous interest in the operation and history of the B&M line, Bassaleg being its southern terminus. He has a wide knowledge of the South Wales railway scene and is a valued member of local railway societies.