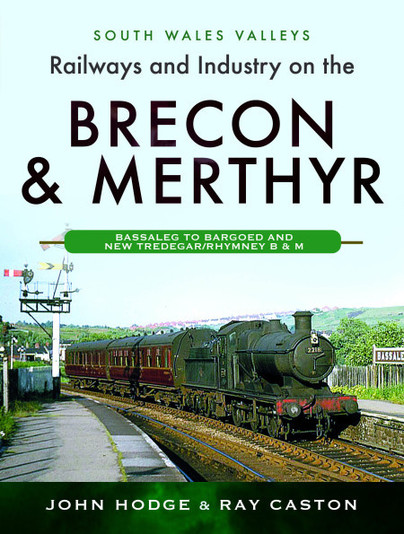 Railways and Industry on the Brecon & Merthyr (Hardback)

Add to Basket
Add to Wishlist
You'll be £31.50 closer to your next £10.00 credit when you purchase Railways and Industry on the Brecon & Merthyr. What's this?
+£4.50 UK Delivery or free UK delivery if order is over £35
(click here for international delivery rates)

This book, as part of the South Wales Valleys series, deals with the former Brecon & Merthyr Railway line which ran from Bassaleg (north of Newport) to Brecon and Rhymney B&M, the latter line being closed north of New Tredegar in 1930 due to a landslide, one of several in that area. The most important and lucrative traffic was of course coal from the many collieries on the line, much bound for Newport Docks, though there was a regular passenger service both to Brecon and New Tredegar which ran to Rhymney B&M before 1930. At Machen the line diverted to Caerphilly and Pontypridd again with coal and passenger services, mostly covered by auto trains. Each location along all lines in the area is covered in detail with copious photographs to illustrate, and an OS Map from the start of the 20th C. to present a detailed coverage of the area around each location. The line is still open from Bassaleg to Machen Quarry for occasional trains of stone traffic using modern traction and wagons.

Ray Caston is a former chemist, working for Monsanto’s at Newport. He has lifelong association with the B&M where his father and grandfather were both employed. He has lived all his life at Bassaleg where he is a local councillor. Since 1970 he has maintained a continuous interest in the operation and history of the B&M line, Bassaleg being its southern terminus. He has a wide knowledge of the South Wales railway scene and is a valued member of local railway societies.