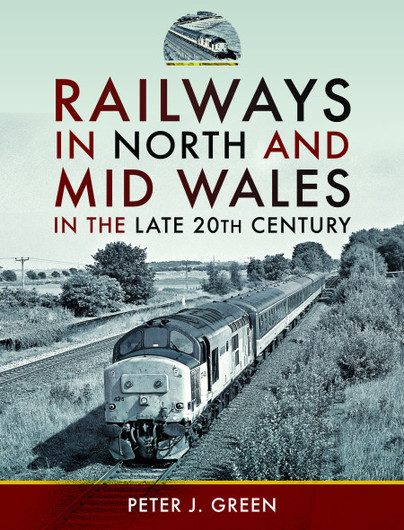 Add to Basket
Add to Wishlist
You'll be £20.00 closer to your next £10.00 credit when you purchase Railways in North and Mid Wales in the Late 20th Century. What's this?
+£4.50 UK Delivery or free UK delivery if order is over £35
(click here for international delivery rates)

The coastal and mountain scenery around the railway lines of North and Mid Wales is among the best in Great Britain. Here we look at the British Railways lines and the trains that ran on them in the years between 1980 and 2000, as recorded by my cameras during my many visits to the area. A few photographs from earlier years are also included to help to complete the picture. During this period of time, quite a lot of mechanical signalling and many old station buildings still remained, all adding to the railway atmosphere. Featured here are the North Wales Coast line and its branches, the former Cambrian line from Welshpool to Aberystwyth and Pwllheli, and the Welsh section of the Shrewsbury to Chester line. While the emphasis is very much on the main lines, the Welshpool and Llanfair Light Railway, closed by British Railways in 1956 and reopened as a heritage railway, and the Llangollen Railway on a section of the former Ruabon to Barmouth line also feature, as does the Vale of Rheidol Railway, sold by British Rail into private ownership in 1989. A few photographs of the steam specials that regularly ran on the main lines are also included.

"This is a photographic journey that will be enjoyed by many enthusiasts."

"The volume will be enjoyed by many enthusiasts whether they are familiar with these lines or not."

"If you like books of railway pictures this is definitely one for you."

A nice pictorial journey through the Welsh railways. This will bring back happy memories for those who travelled when everything was in black and white.

A well put together volume