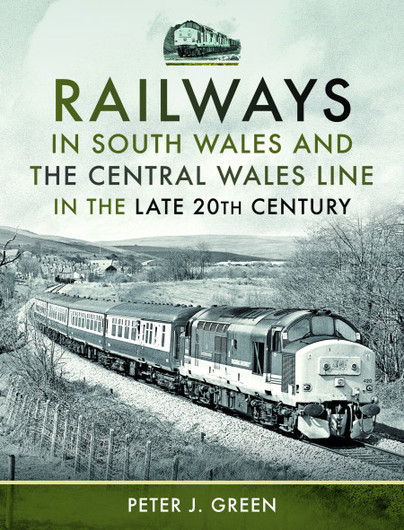 Preorder
Add to Wishlist
You'll be £27.00 closer to your next £10.00 credit when you purchase Railways in South Wales and the Central Wales Line in the late 20th Century. What's this?
+£4.50 UK Delivery or free UK delivery if order is over £35
(click here for international delivery rates)

In the early 1980s, I began to visit South Wales on a regular basis to photograph the railway scene. At that time, the collieries and steelworks were generating a lot of rail traffic with Class 37 diesels being the usual motive power.

Passenger trains were in the hands of Class 47s and 37s, while 'Peaks' and Class 50s would also appear on occasion. HSTs, DMUs, Sprinters and Pacers were, of course, also common.

As time went on, collieries closed and the coal traffic reduced, but there always something new and interesting. Rugby Internationals at Cardiff regularly produced a number of special trains which arrived from various parts of the country, often bringing interesting motive power to the Welsh capital.

The Class 37s were slowly replaced by Class 56s, and later Class 60s, on many duties in South Wales, but the Rhymney Valley saw Class 37 diesels working passenger trains into the twenty-first century, and on Rugby International days, privately-owned Class 50s were also used on occasion.

I also visited the Central Wales line a number of times and particularly enjoyed the time I spent at the small country stations, before the semaphore signals were replaced.

This book contains a selection of photographs taken in the latter part of the 20th and in the very early 21st Century, covering the railways of South Wales and the Welsh section of the Central Wales line. A few photographs of the principal heritage railways in more recent times are also included.