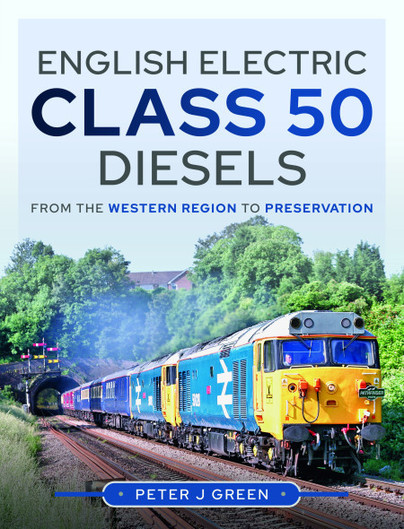 From the Western Region to Preservation

Add to Basket
Add to Wishlist
You'll be £25.00 closer to your next £10.00 credit when you purchase English Electric Class 50 Diesels. What's this?
+£4.50 UK Delivery or free UK delivery if order is over £35
(click here for international delivery rates)

Peter J Green first photographed Class 50 diesels in action in 1975, while they were still being transferred from the London Midland to the Western Region of British Rail. But it was in the early 1980s, when they were named and painted in Large Logo livery, that his interest in the class really took off. For Peter, they stood out from most other locomotives that were painted in the rather drab Rail Blue livery. The sound of the locomotives, particularly when running at speed, was also very impressive, producing shouts of '50!' from waiting photographers, even before the train was in sight. The class became a particular target for his railway photography and many of his trips were made with them in mind. They regularly worked trains around his home town of Worcester, so if he did not want to go too far, it was easy to find a satisfactory subject at which to point his camera. Before their withdrawal in the late 1980s and early 1990s, they were used on many railtours, which always provided good photographic opportunities. Today, with many of the class working on heritage railways, and a number of privately owned locomotives registered for main line use, there is still plenty to keep his cameras occupied. A selection of Peter’s best photos of the Class 50 diesels, taken over a period of forty-five years, appear in these pages.