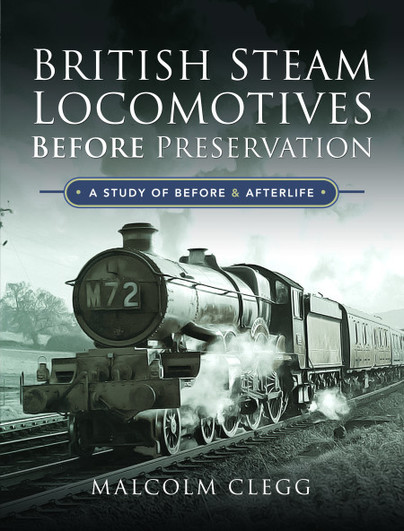 A Study of Before and Afterlife

Add to Basket
Add to Wishlist
You'll be £25.00 closer to your next £10.00 credit when you purchase British Steam Locomotives Before Preservation. What's this?
+£4.50 UK Delivery or free UK delivery if order is over £35
(click here for international delivery rates)

British Steam Locomotives Before Preservation, covers the history in pictorial form of steam locomotives that are now preserved as part of the national collection. It includes those which can be found in private collections and the ones which adorn the various heritage railways operating throughout Britain.

The book looks at each subject both in its working life and during its subsequent preservation.

The pictorial content covers a wide swathe of Britain during the years before the heritage locomotives, were earmarked for preservation.

The book does exactly what it says on the cover and is recommended for anyone with an interest in UK standard-gauge steam. The photographs include not only locomotives, but also trains in some very interesting settings, which adds to the enjoyment of a well-researched offering. Recommended – Next one please!

… the book presents the UK’s preserved steam locos in quite a different light and I found it a fascinating read; easily recommended.

This book can be useful but note that not all preserved locos are included.

"British Steam Locomotives Before Preservation" is about the photography history of steam locomotives that are now preserved as part of the UK's national collection. It includes locomotives that can be found in private collections and those that adorn the various heritage railways operating in Britain. The book discusses each topic both in its working life and during its subsequent preservation.

With its proper balance between information and photographs it manages to successfully unite the past and present of preserved steam locomotives, which is only achieved in some railway museums. Essential for all fans of English steam locomotives and for those who want to see good black and white rail photographs.