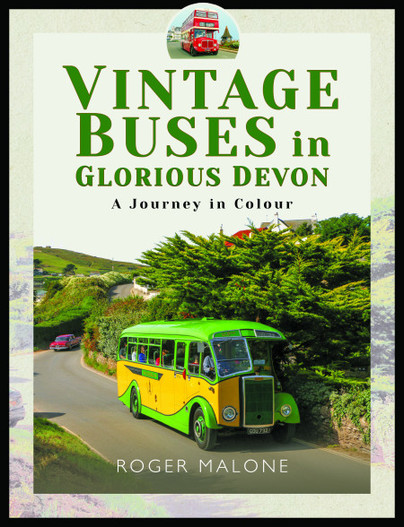 A Journey in Colour

Click here for help on how to download our eBooks
Add to Basket
Add to Wishlist
You'll be £9.98 closer to your next £10.00 credit when you purchase Vintage Buses in Glorious Devon. What's this?
Need a currency converter? Check XE.com for live rates

There is a head-turning charm about heritage transport. And where better to showcase such preserved delights than glorious Devon? This book is an affectionate endeavour to celebrate a bygone era. One kept vividly alive, and on the road, by the dedication of owner enthusiasts. Here buses visit the county's spectacular coastlines, climb towards rugged Dartmoor tors, and pass through picturesque towns and rolling countryside. In more than 200 images the author, Roger Malone, has set out to portray the vehicles in surroundings that are sympathetic to the subject, and which often seem timeless. As well as depicting a fascinating array of heritage public transport, his photographs convey much of the county’s superlative scenery – a delight enjoyed by both Devonians and visitors alike. And so we roam from a magical, rain-shiny running night at Exeter to high summer on Plymouth Hoe; from a climb over the high moors to Princetown, to the genteel Regency resort of Sidmouth. Throughout the book old companies will revive old memories. Royal Blue, Grey Cars, Devon General, Western National – all seen across diverse locations from North Devon to the south coast as we journey on this colourful trip into the past.

This all-colour volume of pin-sharp images is highly recommended.

The photographs in Roger's book bring a real smile! He celebrates a bygone era with affection and today bus trips are still available.

What a wonderful way to sightsee - down memory lane with a picnic basket in hand.

An album marvel with which to remember past times.

Roger Malone is an enthusiast, feature writer, columnist, drama critic and photographer. He lives in Devon and has combined his enthusiasm and skills to produce this attractive quality colour album that lives up to its title.

Article: 'Roger’s photographic love affair on the buses' as featured by

Roger frequently illustrates his own features, and it was while covering the Kingsbridge Vintage Bus Running Day that he first became captivated by the charm and photographic potential of these vehicles.

As a result he pursued them above and beyond the call of journalistic duty. Which was fortunate as it led to this book.