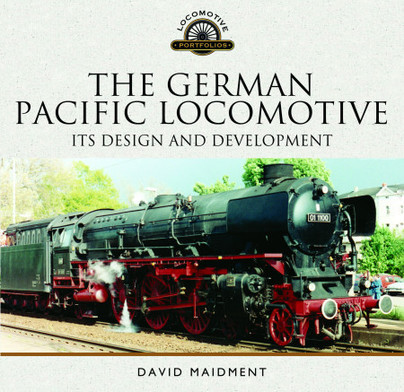 Click here for help on how to download our eBooks
Add to Basket
Add to Wishlist
You'll be £20.00 closer to your next £10.00 credit when you purchase The German Pacific Locomotive. What's this?
Need a currency converter? Check XE.com for live rates

The German Pacific Locomotive (Its Design and Development) is David Maidments fourth book in the series of Locomotive Profiles published by Pen & Sword. It is the first in the series to tackle an important range of overseas steam locomotives, the German pacific locomotives, which, with the Paris-Orleans pacific in France, were the first of that wheel layout in Europe and came to be the dominant type for express passenger work throughout Western Europe for the following fifty years, until displaced by diesel and electric traction.

The German railways in the first two decades of the twentieth century were run principally as regional State railways, and two distinct styles of design developed, which were influenced by the natural terrain. In the south, in the mountainous foothills of the European Alps, four cylinder compound locomotives with comparatively small coupled wheels, most produced by the famous firm of Maffei in Munich, held sway from 1907 until the late 1930s, and in parts of Bavaria that were not yet electrified, even until the early 1960s. In the flatter lands of the north, Prussian 4-6-0s sufficed until Paul Wagners standard two cylinder simple pacifics came onto the scene in 1925, and were followed by the three cylinder streamlined pacifics at the start of the Second World War. After addressing the devastating damage to the German railways in the conflict, the book follows the modernisation of the locomotive fleet in the post-war period until the elimination of steam in both East and West Germany in the mid-late 1970s.

The book describes the design, construction and operation of the full range of pacifics that ran in both parts of Germany, and the large numbers of these locomotives that have been preserved, and is illustrated with over 180 black and white and 80 colour photos.

A visual print file and a mega-study gathered in a single and majestic volume of 400 pages that make a work of these characteristics must be an indispensable piece in our library since such information is worth its weight in gold.

(This book) comes highly recommended to all those with an interest in steam locomotives and their development in Germany and I think it is fair to say that such an extensive study of the German 'Pacific' classes has hitherto only been available in German...

While it's quite expensive at £50 anyone with an interest in (for seeking an introduction to) this subject will find it money well spent.

The author, a GRS member, began his railway career in 1960 and for the last twenty or so years has been busy as a writer, activist in the voluntary sector, as well as a speaker in schools and at general interest groups etc. David received an OBE for services to the railway industry in 1996 and in 2012 he received a Life Achievement Award at the National Rail Awards.

In this his latest work he takes a look at the history and development of the German ‘Pacific’ locomotive from its beginnings at the start of the 20th century through the Länderbahn types to the later classes 01, 03 of the Deutsche Reichsbahn (DR) and Deutsche Bundesbahn (DB) and the DB Class 10. There are photographs of all the different ‘Pacific’ locomotive classes, many of which are in colour and all of these are of the highest quality. Many of these illustrations show the locomotive in close-up, which is particularly useful for the modeller. Detail differences are referred to as well as their areas of operation and there are also some timed runs given for trains worked by locomotives of classes 01, 03, 10, 18.6 and locomotive 18 201. Also included are a number of their working diagrams.

In chapter 17 a look is taken at foreign ‘Pacific’ locomotives that were used by German railways, such as the ex SNCF Chapelon Pacific No. 23 1E 18, and more recent Plandampf workings are described and illustrated in chapter 19.

The book contains a listing of all the relevant dimensions and weights of the ‘Pacific’ locomotive types complete with scale drawings. The book is rounded off by two maps of the German railway network pre 1945 and post 1945 with the two railway administrations, DB and DR.

At £50 this is not a cheap publication. Nevertheless it comes thoroughly recommended to all those with an interest in steam locomotives and their development in Germany and I think it is fair to say that such an extensive study of the German ‘Pacific’ classes has hitherto only been available in German from the likes of Eisenbhan-Kurier Verlag. All royalties from this book are being donated to Railway Children Charity (www.railwaychildren.org.uk).

An initiate and fascinating look at the German Pacific Locomotives. Enthusiasts will be suitably impressed, and the photographs are amazing!

David Maidment was a senior manager with British Railways, with widespread experience of railway operating on the Western and London Midland Regions culminating in the role of Head of Safety Policy for the BRB after the Clapham Junction train accident. He retired in 1996, was a Principal Railway Safety Consultant with International Risk Management Services from 1996 to 2001 and founded the Railway Children charity (www.railwaychildren.org.uk) in 1995. He was awarded the OBE for services to the rail industry in 1996 and is now a frequent speaker on both the charity and his railway career and author of four novels, two non-fiction works on street children and over eighteen books for Pen & Sword’s locomotive portfolio series, the royalties from all being donated to the charity.