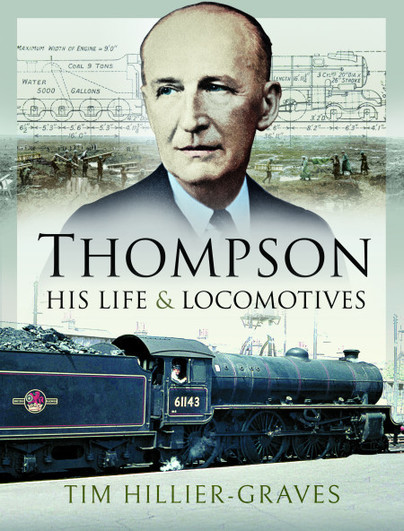 Thompson, His Life and Locomotives (Hardback)

Add to Basket
Add to Wishlist
You'll be £31.50 closer to your next £10.00 credit when you purchase Thompson, His Life and Locomotives. What's this?
+£4.50 UK Delivery or free UK delivery if order is over £35
(click here for international delivery rates)

He was in office from 1941-1946, when he retired, after a long career as a mechanical engineer, working for several railway companies, including the North Eastern, Great Northern and after the grouping the London & North Eastern Railway.

He was a very controversial figure, often maligned by railway historians for his reconstruction of several classes of steam locomotive, including the Gresley prototype pacific Great Northern, which many people still feel was unnecessary.

However there is more to Edward Thompson than his period as Chief Mechanical Engineer of the London & North Eastern Railway, in that he had a complex side to him, which might have originated from his experiences in the First World War, during which he served with distinction in France.

This book for the first time, sets out to explain both the man and his philosophy, looking at the complex reasoning behind the way he came to his decisions over locomotive design and why he decided to reconstruct a number of Sir Nigel Gresley's locomotives.

"Definitely a recommended title if you have any interest in the former LNER; other readers will also find the descriptions of the changes in the early twentieth century railway workshop and engineering scene give a fascinating insight into this period of change."

The Journal of The Stephenson Locomotive Society - No.933 Volume 98

"This is an important work that gives a new and well-argued perspective about Edward Thompson. The book is extremely well presented and laid out, with an excellent selection of photographs, several or rare, if not unique, interest, together with many locomotive drawings, line diagrams and statistical information. It is essential reading, not just to LNER devotees, but to anyone interested in the development of the steam locomotive in the 20th Century."

This excellently illustrated book is a first class defence of the man and his locomotives.

Tim Hillier-Graves’ work on Edward Thompson, the LNER’s penultimate CME, is a thoroughly readable and comprehensive account of his career and provides fascinating insights into the man and his achievements. Often seen as a controversial character, who is seen by some as attempting to undo some of Gresley’s work, the reality is somewhat different and Thompson as CME needs to be judged against the background of circumstances in which he was forced to operate.

Thompson seems to have rather divided opinion during his lifetime, and has certainly done so since his death; this book takes a commendably dispassionate view of its subject, and provides a useful overview of the man and his role in the LNER’s history.