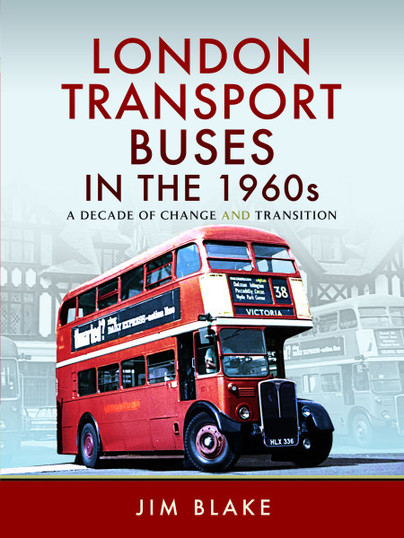 A Decade of Change and Transition

Click here for help on how to download our eBooks
Preorder
Add to Wishlist
You'll be £9.98 closer to your next £10.00 credit when you purchase London Transport Buses in the 1960s. What's this?
Need a currency converter? Check XE.com for live rates

Just as life in Britain generally changed dramatically during the 1960s, so did London Transport's buses and their operations. Most striking was the abandonment of London's trolleybuses, once the world's biggest system, and their replacement by motorbuses. Begun in 1959 using surplus RT-types, it was completed by May 1962 using new Routemasters, designed specifically to replace them. They then continued to replace RT types, too.

Traffic congestion and staff shortages played havoc with London Transport's buses and Green Line coaches during the 1960s, one-man operation was seen as a remedy for the latter, shortening routes in the Central Area for the former. Thus the ill-fated "Reshaping Plan" was born, introducing new O.M.O. bus types. These entered trial service in 1965, and after much delay the plan was implemented from September 1968 onwards. Sadly, new MB-types, also introduced in the Country Area, soon proved a disaster! Unfortunately, owing to a government diktat, Routemaster production ended at the start of 1968, forcing LT to buy "off-the-peg" vehicles unsuited to London operation and their in-house overhaul procedures. The decade ended with the loss of LT's Country Area buses and Green Line coaches to the National Bus Company.

Photographer Jim Blake began photographing London's buses towards the end of the trolleybus conversion programme in 1961 and continued dealing with the changing scene throughout the decade. He dealt very thoroughly with the "Reshaping" changes, and many of the photographs featured herein show rare and unusual scenes which have never been published before.