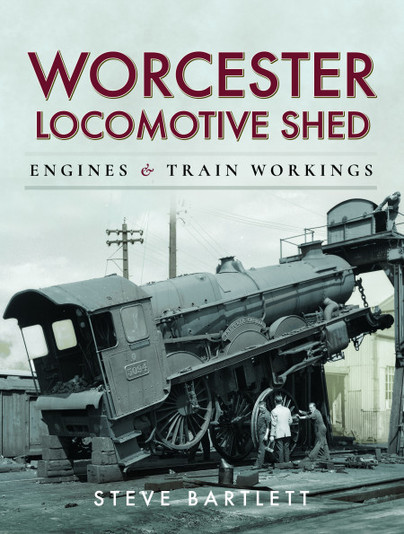 Add to Basket
Add to Wishlist
You'll be £25.00 closer to your next £10.00 credit when you purchase Worcester Locomotive Shed. What's this?
+£4.50 UK Delivery or free UK delivery if order is over £35
(click here for international delivery rates)

Worcester Locomotive Shed is the third in a series of in depth studies of Western Region motive power depots. This provincial city was a busy and fascinating rail centre with main line passenger and freight services passing through alongside local passenger and freight tripping duties that together provided an endless panorama of railway activity.

The Great Western Railway had a major locomotive depot here and this book takes a detailed look at the shed, how it functioned, its locomotives and its operational duties during the latter days of steam. As well as official records valuable detail and reminiscences have been gathered from former footplate and shed staff ensuring that local custom and practice is well recorded in the story. The depot’s sub-sheds at Evesham, Honeybourne, Kingham and Ledbury are also all covered in detail as well as Worcester Locomotive Works.

Worcester was also home to the fondly remembered ex-GWR diesel railcars and it was their last operational base at the time of final withdrawal in 1962. Their role in the area is well covered in photographs and words. Taken together the book is both a valuable historical record and a fascinating and readable story of a large motive power depot in the latter days of steam.

This is another superb addition to the series and as with previous titles where, both reproduction and printing are excellent, comes highly recommended.

Reading through this excellent book is a reminder of just how labour intensive steam locomotive operation was. The author knew the shed well and has drawn on staff reminiscences and photographs to show the human side of shed operation, something often overlooked in railway books...

... The author describes in detail how trains were worked from Worcester. Along with the author’s earlier books about Hereford shed (recently reprinted) and Gloucester sheds this isn’t only an exercise in nostalgia but a useful contribution to railway history. WE need more of this quality. Highly recommended.


Society of Model and Experimental Engineers

These two books (and indeed the author’s complementary volume on Gloucester’s sheds) are highly recommended and provide a valuable insight into how steam locomotive workings in each area were organised. It should be added that both books are absolute bargains at £25 in this day and age!

This book is a complete dedication by this enthusiast to his subject. This author has again excelled on his subject, providing much detail, photographs and maps. This is the third in the series of in depth studies off Western Region locomotive sheds described as a busy and fascinating rail centre of which it was. Many modellers enjoy the Western Region (GWR), and, I believe, would find these books full of very relevant information. I have to comment on the thoroughness that Steve has applied to all three of his publications so far.

This offering comes highly recommended and is a must-buy whether or not you are Worcester based!

"The Mancunian" the journal of the Manchester Locomotive Society

The way that the shed functioned is clearly described and, once again, it is backed up with many fine photographs. An excellent book and a “must” for any GWR enthusiast!

The vast subject of 85A is well-documented for the first time and enlivened by over 200 carefully selected photos taken in the district, and some exceptionally clear track diagrams. Highly recommended.

This book is quite brilliant and is a great addition to the few books that have featured Worcester as a Railway Town, Well done to Steve for collating so much information on our behalf and creating such a brilliant Railway book that will be sought after for years.