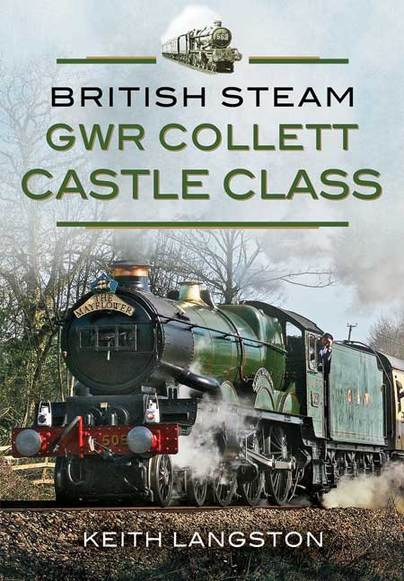 Click here for help on how to download our eBooks
Add to Basket
Add to Wishlist
You'll be £10.00 closer to your next £10.00 credit when you purchase British Steam: GWR Collett Castle Class. What's this?
Need a currency converter? Check XE.com for live rates

The 'Castle' class 4-6-0 locomotives designed by Charles Collett and built at Swindon Works were the principal passenger locomotives of the Great Western Railway. The 4-cylinder locomotives were built in batches between 1923 and 1950, the later examples being constructed after nationalisation by British Railways.

In total 171 engines of the class were built and they were originally to be seen at work all over the Great Western Railway network, and later working on the Western Region of British Railways.
The highly successful class could be described as a GWR work in progress, because further development took place over almost all of the locomotives working lives. In addition to inspiring other locomotive designers the 'Castle' class engines were proved to be capable of outstanding performances, and when introduced were rightly described as being 'Britain's most powerful passenger locomotives'. Some of the 'Castles' survived in service for over 40 years, and individually clocked up just a little short of 2 million miles in traffic.

In this book, Keith Langston provides a definitive chronological history of the iconic class together with archive photographic records of each GWR 'Castle' locomotive. Many of the 300 plus images are published for the first time. In addition background information on the origin of the names the engines carried, including details of the many name changes which took place, are also included. The extra anecdotal information adds a fascinating glimpse of social history.

Collett CASTLE Class is a lavishly illustrated factual reference book which will delight steam railway enthusiasts in general and in particular those with a love of all things Great Western!

The aspect that makes this book a truly valuable resource is the rich selection of photographs. Any enthusiast or modeller who has tried to track down a photo of a particularly elusive engine will know how difficult that can be, but every single 'Castle' is here. And they are not just ordinary photos - there are some real gems and seldom seen ones among them, including many in colour. As a documentary record of one of the best-loved British locomotive classes, this will be a useful addition to any enthusiast's bookshelf.