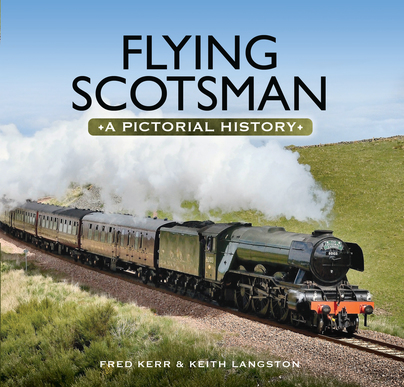 Click here for help on how to download our eBooks
Add to Basket
Add to Wishlist
You'll be £8.00 closer to your next £10.00 credit when you purchase Flying Scotsman. What's this?
Need a currency converter? Check XE.com for live rates

Built at Doncaster works in 1923 the Nigel Gresley designed then-‘A1’ class Pacific (4-6-2) first entered service as No 1472. The new locomotive did not receive a name until it was sent for display at a Wembley exhibition in 1924, and then the name Fying Scotsman was chosen.

The Legend was born. In 1928 the London North Eastern Railway (LNER) express steam locomotive hauled the first non-stop service from London to Edinburgh and in 1934 went on to break through the 100mph barrier.

In addition to regularly hauling express trains for the LNER and later British Railways (BR), the Gresley steam icon has also travelled to, and worked passenger trains in, North America and Australia. Withdrawn by BR in January 1963 as BR No 60103, the locomotive was bought for preservation and soon became a regular sight on mainline specials and at preserved railways.

The locomotive’s history in preservation is an interesting if not chequered one, however stability is now assured as Flying Scotsman has rightly become a part of the national collection administered by the National Railway Museum (NRM). The excitement which surrounded the return to steam of Flying Scotsman in 2016, and the ongoing celebrity status afforded to the famous Gresley designed engine, are perchance confirmation of the fact that it is ‘The World’s Most Famous Steam Locomotive’. The ‘most famous’ phrase entered into locomotive preservation folklore when first broadcast by John Noakes, a BBC TV Blue Peter presenter.

A great many words have been written about the engineering specification and ‘in service’ performance of Flying Scotsman. Accordingly, this keepsake publication simply uses carefully selected images, dating from the BR steam era to the present day, to celebrate the ‘Return of the Legend’.

This publication includes a selection of QR Codes with links to items of film footage.


Recommended if this locomotive is of particular interest.

What it says on the cover, a largely pictorial history with almost all pictures taken in preservation.
New to me, QR codes in the text allow access to YouTube videos or websites if you have a smartphone.

Profusely and beautifully illustrated with both B/W and colour photography, "Flying Scotsman: A Pictorial History" is an extraordinary historical account that will be an especially appreciated addition to the personal reading lists of dedicated railroading enthusiasts, as well as an enduringly popular addition to both community and academic library Railroading History collections and supplemental studies lists.

The visual part of the work is very refreshing, a selection of 54 black and white images and 101 full colour will delight all lovers of photography.

Superb and careful work with an impressive visual file.