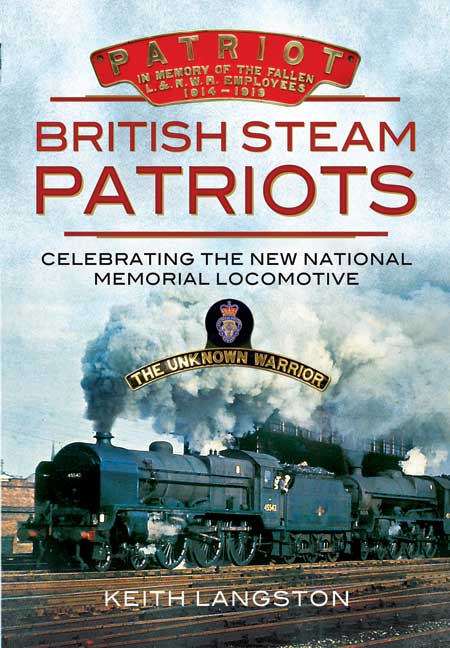 Click here for help on how to download our eBooks
Add to Basket
Add to Wishlist
You'll be £4.99 closer to your next £10.00 credit when you purchase British Steam Patriots. What's this?
Need a currency converter? Check XE.com for live rates

Following the success of the first two rebuilt 'Claughton' class engines, the London Midland & Scottish Railway (LMS) in 1932 embarked upon a building programme of fifty more 'Patriot' class 5XP locomotives. The new 4-6-0 locomotives were at first referred to as 'Baby Scots', until officially named the 'Patriot' class in 1937. Two batches of the new 3 cylinder engines were built simultaneously, forty at Crewe and ten at Derby. In 1948 British Railways took all fifty-two 'Patriot' class engines into stock and subsequently eighteen of the class were rebuilt as '7P' locomotives. Although successful in traffic and popular with engine crews and enthusiasts alike, no example of these trains survived into preservation.

This definitive work looks at the details associated with each member of the class and archive images of all fifty-two locomotives are featured. In addition to looking back this comprehensively researched and highly informative account of the LMS 'Patriot' class also details the plan to build the 53rd member of the class, to be known as locomotive No 45551 THE UNKNOWN WARRIOR.

Plenty of quality illustrations. You will not feel disappointed if this book comes your way.

Plenty of quality illustrations.
You will not feel disappointed if this book comes your way.

With the subtitle celebrating the new National Memorial Locomotive regular Steam Railway contributor Keith Langston does just that in this new volume exploring the history and carers of the popular LMS Baby Scots.

Where the book really excels is in its profile of each and every member of the 'Patriot' class, giving details of build dates, allocation history and any other appropriate information.

It is evident that Keith Langston has done his research in compiling the details of the individual class members, selecting a wide variety of good images to illustrate the book.

This book would be a welcome addition to the bookshelves of any exponent of the LMS.

Designed by Sir Henry Fowler for the London, Midland & Scotland Railway (LMS), 52 'Patriot' class locomotives were built between 1930 and 1934. Originally nicknamed 'Baby Scots', to reflect the class' use of cylinders for the 'Royal Scot' class of engines, its new name was adopted in 1937 following the renaming of 5500 from Croxteth to Patriot, in tribute to the railway employees who lost their lives during the First World War. Having travelled 1.3 million mines, the entire class was withdrawn and scrapped in the early 1960s, being too recent to be considered for preservation.

Construction work is currently underway to build a brand new 'National Memorial engine', the 53rd member of this class. To be called The Unknown Warrior, a name chosen during a public vote, it will use a mixture of original and newly cast parts. In order to raise much needed funds for its construction, Langston has produced a book that provides a unique insight into the class.

Providing a detailed account of it's history and packed with plenty of photographs, it makes a fascinating read.