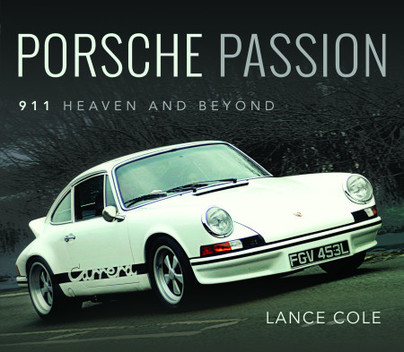 Add to Basket
Add to Wishlist
You'll be £25.00 closer to your next £10.00 credit when you purchase Porsche Passion. What's this?
+£4.50 UK Delivery or free UK delivery if order is over £35
(click here for international delivery rates)

In a book of Porsche photography and engaging conversation, Lance Cole journeys through a personal passion for Porsche –one that many supercar enthusiasts share.

Herein light falls on sculpted metal and paint – shiny and less shiny. Throwing off the conventions of Porsche purism, yet at the same time always respecting the origins of Porsche, and the status of the 911, this is a book that celebrates the engineering and the design language of Porsche amid its culture. From an “oily-rag” 356 to old 911s and new 911s, with a brief alighting upon other cars of the Porsche clan, this is an eclectic collection of enthusiasts “moments” captured across a British Porsche landscape.

This book is laid out in chapters with many beautiful colour and black & white plates with good descriptions by each one. The book starts with a dedication (to Christian Friedrich Carl Alexander – a 18th Century Margrave (Military commander of a specific region) Which refers to his life and work – am not entirely sure of the association here but believe the above came to England from the Germanic regions to breed horses and of course, the Porsche badge itself features these. Following from this is a Memorium to Hans Sprinzel, a famous Porsche aficionado and of course acknowledgements to various others. The books’ introduction, ‘In pursuit of Porsches – a conversation, talks about the history in general of Porsche. Chapter 1 ‘Primordial Porsche’ talks about the 356 model along with the various colour plates as previously mentioned. Moving onto chapter 2 ‘Luftgekuhlt in Heaven’ is about the air-cooled engines and efficiency of the same (Luftgekuhlt translates as air-cooled by the way!). Chapter 3 ‘On the Cam(s)’ refers to the drivers, drivability of the racing Porches, again with some good colour photographs. Chapter 4 ‘Newer Neunelfer’ (Newer 911) goes into newer more advanced models such as the 930 and 959 along with racing variants of these. Chapter 5 ‘A wider view’ is talking about the 928, 944 and 969’ and the enthusiasts’ thoughts on these and their eventual gain in popularity from a fairly negative beginning. The book finishes up with a good index. Lance Cole has, in my opinion, set out another excellent motor subject especially with this famous vehicle.

"Cole approaches his subject with the eye of a photographer as well as a writer so the illustrations are stunning. This is a great counterpoint to most other Porsche works."

"This is beautiful work, very evocative and a superbly designed book that steps out of the expected norm."