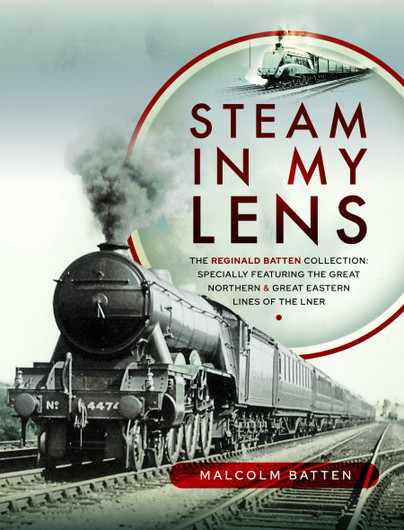 Steam in my Lens (Hardback)

The Reginald Batten Collection: specially featuring the Great Northern and Great Eastern lines of the LNER

Add to Basket
Add to Wishlist
You'll be £27.00 closer to your next £10.00 credit when you purchase Steam in my Lens. What's this?
+£4.50 UK Delivery or free UK delivery if order is over £35
(click here for international delivery rates)

Reg Batten was a railway and transport photographer, who started taking pictures in the early 1930s, mostly on the Great Northern and Great Eastern sections of the L N E R.

He later started taking pictures elsewhere on the railway network, covering other companies, also looking at other forms of transport like traffic on the river Thames.

This is the first book of Reg Batten's work, covering his railway photography from the early 1930s, through wartime into the 1950s, and steam on into the preservation era. This volume not only covers locomotive types but also looks at locations and interesting features of the railway scene at that time.

"This is an excellent book, in which lovers of the British steam scene are almost certain to find something to suit their tastes."

As those old enough to have witnessed widespread steam power are now clearing lofts and discovering their long-forgotten photo albums, or those of their parents, there have been several books of these collections published in the past decade. This one is no exception, and brings into the public domain a superb collection of photos covering over seventy years from the early 1930s.
Malcolm managed to go through the photos with father Reg before his passing in 2014 at the age of 100, and extract an oral history of the various trips he made recording railways, mainly on the LNER. As a professional photographer, he usually had a camera with him, and photos during his war years in North Wales are also included, plus half a dozen from a brief Belgian holiday. Reg's recollections, especially of his exploits in WW2 provide a colourful and eventful backdrop to the photos, especially his excuses for taking pictures when such activities were 'suspicious' even when dressed in Army uniform. It is clear from the photos that many were taken from the lineside within the railway boundary, so we have some excellent shots of locos at close quarters. Apart from a few photos of preserved lines in colour, all are mono, with a few older ones a little fuzzy. However, as Reg's expertise and equipment improved the clarity of the photos did likewise and the book contains an excellent collection of photos taken at various lineside locations plus many visits to sheds. Several photos and stories have been published over the years in railway and heritage magazines. Reg was also an avid photographer of country scenes, barns, churches and anything 'bucolic' drawing his attention.
Sadly, on his own admission, Reg didn't bother to record date and location of his many photos, so when Malcolm sat down with his father in the late 1980s to 'write-up' Reg's recollections, details were somewhat sketchy, and this is reflected in some of the captions such as "a grimy J39 near Shenfield on the Great Eastern line. The stories, related in the first person, give a very personal view of his trips mainly in London and the northern home counties. However, lack of dates and precise locations does not detract in any way from the enjoyment of the book, and Reg's ability to compose a good photo irrespective of the subject matter shines through. Many drivers and firemen were obviously pleased to have their mundane steeds recorded for posterity with smiling faces leaning from cab windows. We can all relate to some of Reg's stories of friendly signalmen inviting one into the 'box and advising on what was expected and where to get the best shot, encounters with bulls in lineside fields and the perennial risk of bees, nettles and brambles! As with many of these photo-collection books, this one brings back nostalgic memories of innocent train photography in those far off days when the sun shone and many happy lineside hours were spent just watching whatever came along. Malcolm has done an excellent job selecting and sharing his father's stories of his seventy years of railway photography.

The vast majority of the photographs have not been seen before and are therefore a most welcome addition. The quality of reproduction is excellent as usual. This should find a place on the shelves of many LNER enthusiasts, recommended.

A very nostalgic read. Brought back memories of my childhood, trainspotting on Southern Region railways in the 60's at the tail end of steam. Nice to occasionally reminisce.

This is a great way to pay tribute to a well known train-spotter/photographer. A well known name amongst those with a similar interest.
The book was well laid out with so many wonderful pictures of steam locomotives from bygone era with accompanying information about what you see. In each chapter, the author shared his experiences at the time, recounting details of the environment of the days, what he saw, how he reacted and how he felt. The author also explained the choices of cameras and film that were available at the time. How different photography was compared to now.
My husband, Andrew, has is a train enthusiast and found this book very interesting. He recommends anyone with a similar interest should check this book out. We reviewed an ebook version which was enjoyable but a hardcopy would be even better!

Manna from heaven to the right reader, this book will only act as a superlative tribute to the man whose photographs and words make up its core. With so many welcoming cliques in railway fandom, the Gresley Society and others will be aware of this gent, whose interest in photography and taking pictures of trains and other modes of transport spanned nine decades.

If you are a keen train spotter then you will love this book of photographs of steam engines with accompanying descriptions. The book also shares the details of the photographer, Reg Batten his background & life, his hobbies, his cameras, his friends and his joy.