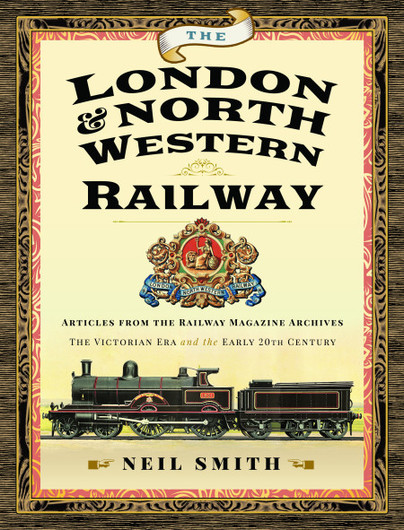 Add to Basket
Add to Wishlist
You'll be £31.50 closer to your next £10.00 credit when you purchase The London & North Western Railway. What's this?
+£4.50 UK Delivery or free UK delivery if order is over £40
(click here for international delivery rates)

This book is a wonderful miscellany of the London & North Western Railway, here is a delightful new illustrated history of the Premier Line, drawn from the Railway Magazine archives, which covers the close of the Victorian Era and the start of the 20th century, topics of the 27 chapters include.

Engine Drivers and Their Duties by C.J. Bowen-Cooke

The Irish Mail and the 'American Special' Trains

The large number of photographs and illustrations, mostly from the archives of the London & North Western Railway Society, make this a very special book.


Neil Smith is to be commended for his excellent choice of articles that fill 27 chapters, each being a reproduction of an article about the LNWR that was published in the Railway Magazine between August 1897 and April 1904.

There are revealing interviews with C.J. Bowen Cooke, District Locomotive Superintendent of the LNWR, who describes the role of engine drivers and their duties, Frederick Harrison, General Manager of the LNWR, who provides interesting insights into how the LNWR is seeking to expand its business, and F.W. Webb, the LNWR’s Chief Mechanical Engineer, who describes the more technical aspects of the company’s locomotives.

The variety of trains to be seen 120 years ago is exemplified by a series of chapters on notable railway stations, with Birmingham New Street, Carlisle Citadel, Euston, Manchester London Road (now Piccadilly), and Preston featured.

Chapter 3 describing 24 hours at Willesden Junction is an eye-opener. The station’s role has changed so comprehensively since its original publication in September 1897, when Willesden was both a major interchange and a ‘ticket’ station, at which passengers’ tickets were collected before they reached the terminus at Euston, a function that disappeared following the widespread introduction of corridor trains.

Surprisingly, the USA features in two articles, with an account of LNWR rolling stock that travelled to the United States for the Chicago International Exhibition of 1893, whilst Chapter 5 describes a trip on the seemingly secretive “American Special” trains that ran in connection with transatlantic ships from White Star Line and Cunard to New York. The train ran non-stop from Euston to Edge Hill in Liverpool, where a couple of 0-6-0 tank engines took over for the short distance to Riverside station, conveniently placed for transfer to the ships.

Crewe merits two chapters, one describing its evolution into the celebrated railway town, the other how it became a virtual ghost town during the annual Crewe Works holiday week. As well as Crewe Works, other railway establishments featured include Wolverton Carriage Works and Earlestown Wagon Works.

Whilst the LNWR did not have its own route to Sheffield, it did have running rights over the Grand Central. To accommodate freight that exercised those running rights, it built a new goods warehouse in the city. To service the warehouse, the company laid a short line, barely three-quarters of a mile long, giving the LNWR its own line separated by about 30 miles from the nearest point on its own network.

Articles on specific routes and trains include journeys on the Irish Mail, the Liverpool Express, LNWR cross country services, and London to Birmingham express train services. Further articles describe the opening and early years of the LNWR’s constituent companies, including the Liverpool & Manchester Railway, London & Birmingham Railway, and the Grand Junction Railway. Equally interesting is a description of an LNWR route to Manchester via Ashbourne, through the heart of Midland Railway territory.

Completing the volume are chapters on LNWR rolling stock including Precedent and Webb Compound locomotives, and Royal Saloons.


5 out of 5 - Worth every penny and highly recommended.

PROS
• Excellent choice of articles, and the right balance between text and illustrations.

• A fine railway book whose content and layout lends itself to dipping in at random or as a wide-ranging introduction to the LNWR.

CONS
• Difficult to find a bad word to say about this book.

Martin Higginson, The Journal of the Friends of the National Railway Museum Summer 2021

The author, an MLS member, has taken a different approach in tackling the subject of the “Premier Line” by reproducing a series of articles previously published in The Railway Magazine. They date from late 1897 through to mid 1904, with each of the 27 chapters a separate article. The original text has been presented in an up to date format with new photographs and Illustrations inserted. Some originals have been retained but enhanced using modern techniques. The L&NWR Society archives have provided many of the new images and diagrams.
This delightful miscellany covers many aspects of the L&NWR and its operations. Chapters include personal interviews with F. Harrison and F. Webb , Wolverton and Earlestown Works together with the principal stations served by the Company. Others detail Royal Saloons, and the Opening and Early years of three of the L&NWR constituent companies, the Liverpool & Manchester, the Grand Junction and the London & Birmingham Railways. Chapter 19 covering Manchester London Road will be of special interest to MLS members. Webb’s Compounds, chapter 17, contains a photo taken at Stockport, just showing the end of the Society club rooms. Altogether an interesting book for devotees of “The Premier Line”.

"This is a fine railway book whose content and layout lends itself to either dipping in at random or as a wide-ranging introduction to the ‘Premier Line’ at the height of its power."

The book is produced to Pen & Sword’s usual high standard, thus highlighting the quality of the material included. For those with a liking for the L&NWR or who wish to gain knowledge of this remarkable line, this book is thoroughly recommended

This fascinating book is recommended for all, not only for those with a particular interest in that railway.

Let’s hope it catches on. It’s good material, and a whole lot better than spending hours trawling through a complete library of heavy bound volumes, even if you are fortunate to own one. This is a great insight into routine life of the LNWR from the mouths of the senior people who made it the Premier Line.

This winning format makes a change from the usual railway history books.

Article: 'Journey back to opening of city’s new-look station as featured by

I see this book as an essential addition to the bookshelves of all LNWR students and it will appeal to those with interests in the many different aspects of that great company.

This is an essential book for those interested in the LNWR. It has the right balance between illustrations and narrative.

Well worth a read

Neil Smith had a varied career with British Rail working as Relief Station Master at Bletchley and Bedford, Euston HQ and Assistant Station Manager at Oswestry. He was appointed to Freight Traffic Manager at Crewe Basford Hall Marshalling Yard and finally to Duty Manager at Crewe Area Operations Centre having overall control of 70 miles of the West Coast Main Line. Author of two previous books “Times of Our Lives” (Memories of the 20th Century) and “Inside Crewe Locomotive Works”.