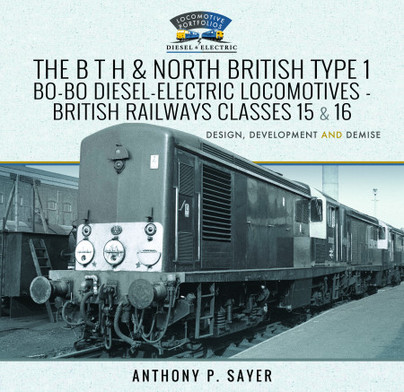 Click here for help on how to download our eBooks
Add to Basket
Add to Wishlist
You'll be £19.99 closer to your next £10.00 credit when you purchase The B T H and North British Type 1 Bo-Bo Diesel-Electric Locomotives - British Railways Classes 15 and 16. What's this?
Need a currency converter? Check XE.com for live rates

Anthony P Sayer has produced another cracking volume in Pen & Sword’s Locomotive Portfolio series, this time covering two small classes of diesel traction designed as part of the Pilot Scheme orders of 1955. It follows the same format as earlier volumes, with a huge amount of detail in its 350 pages on how the locos came to be built, their technical specifications, individual histories of each member of the two classes, and illustrations of each member of the classes at various stages of their short lives. At least one photo of each class member is provided, together with depot allocations and withdrawal dates.

As with previous volumes in this series, a huge amount of research time was clearly invested in the book, and one of the highlights is the author’s access to and quotes from official archive records such as those involving BR and manufacturers’ representatives dealing with the early loco failures in traffic. We read of fractured crankcases, distorted cylinder heads and blocked turbochargers, but it is also clear from BR records that the BTH design had a significantly higher availability than its North British counterpart. Once again, questions arose during the 1960s over whether the cost of significant alterations to components could be justified in the light of declining traffic and the anticipated short lives foreseen for the two classes. A solitary member of the BTH class (class 15) survives in preservation, and is being rebuilt by society volunteers at the East Lancs Railway.

The book is illustrated with a well chosen selection of images, including two press photos of D8221’s unexpected arrival in Croft Street, Ipswich after crashing through buffers. Other interesting views feature trains in London, including Stratford Low Level and Millwall Junction as well as a transfer freight on the LT lines at East Finchley. Colour views are included in several of the stationary and moving images, and all have been reproduced to a high standard.

Anthony Sayer has given a thorough account of the class with details of designs, individual locomotive histories, accidents and fire damage, liveries, allocations, storage, withdrawal and scrapping. A good book of the quality we’ve come to expect from the author but of specialised interest.

Roger Backhouse - The Society of Model and Experimental Engineers Journal - June 2022, Vol. 30, No. 3

"This is another excellent detailed and substantial reference book from an author who asks you the questions that you didn’t realise that you needed to know and proceeds to tell you with credible authenticity. Recommended."