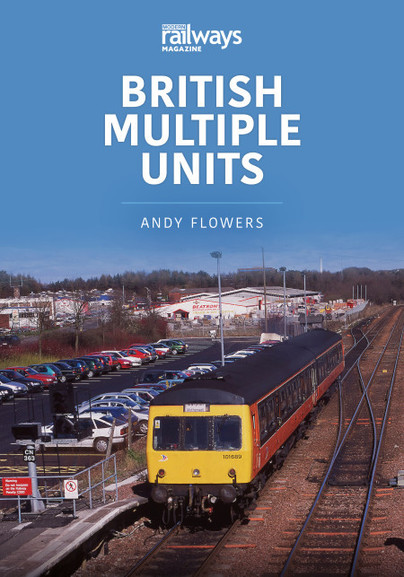 Preorder
Add to Wishlist
You'll be £12.79 closer to your next £10.00 credit when you purchase British Multiple Units. What's this?
+£4.50 UK Delivery or free UK delivery if order is over £35
(click here for international delivery rates)

Multiple units are the unsung heroes of the modern railway system. Although they make up the main form of rolling stock for the majority of rail passenger services operated worldwide, particularly in high-density inner-city and urban traffic, they see much less media coverage than the more popular locomotive types. The many advantages of these units, as opposed to locomotive-hauled trains, include higher capacity, less track damage and lower operating costs, making them an ever more popular choice for modern, cost-conscious railway operators in Great Britain and around the world.

Illustrated with more than 180 photographs, this book details the history of the major unit types that have operated on the UK’s rail network, beginning with the earliest Victorian-era steam railcars and the first late-Victorian experiments with electric-powered traction, and going right up to the modern hybrid-powered multiple units currently under development. The story is told through a selection of photographs, class details and tables listing the major unit types classified by propulsion method and generation.

Andy Flowers has been a freelance railway photographer and journalist for over 25 years. He has worked for a wide range of UK-based railway magazines including The Railway Magazine, Railway World, Traction, Railways Illustrated, Rail Express and Todays Railways. He also worked for railway publishers Platform 5 as a news editor and features writer and has prepared a number of articles for foreign railway magazines.