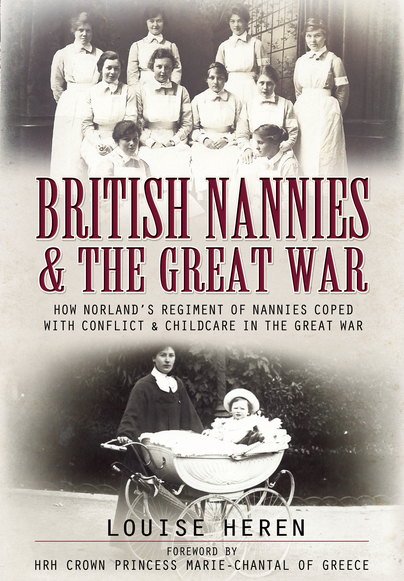 As seen in the Daily Express: How Norland nannies defied Kaiser Bill

You'll be £19.99 closer to your next £10.00 credit when you purchase British Nannies and the Great War. What's this?
+£4.50 UK Delivery or free UK delivery if order is over £35
(click here for international delivery rates)

In 1912, Norland children’s nurse Kate Fox was travelling by train heading to the British military station at Nowshera on the Afghan border to care for the premature baby born to the base’s commanding officer. Two years later, Kate was escaping from Germany in the first days of the Great War, leaving behind her adored German royal charges and all her personal possessions.

Due to their prestige as the crème-de-la-crème of Edwardian children’s nurses to Europe’s royal and wealthy families, Kate was one among many Norland nannies who witnessed the early days of the War on the Continent with all its tumult and fear. Some fled for home; others managed to stay for a while. And yet others gave up their privileged way of life to undertake war work as nurses in Flanders and refugee camps.

The stories in this book are the nannies’ eye-witness accounts described in their correspondence with their beloved Norland Institute. These previously unpublished letters recount a version of women’s Great War history that has remained untold until now.

British Nannies and the Great War is the true story of a group of Edwardian, highly trained and opinionated women in the First World War. For the first time in a century, the Norland nannies’ unique stories of escape from enemy territory, their experiences at home and the Front during the War, and their thoughts on how the conflict changed their role in post-Edwardian Britain are told in their own words.

Norland nannies are the creme de la creme and in British Nannies and the Great War by Louise Heren we learn how a whole regiment of them coped with conflict and childcare, both at home and abroad. Many were involved with royal families and even more with varying levels of aristocracy.

An excellent social history of the First World War told from a completely new perspective.

There's an overpowering tendency to think of the Great War as a man's war; after all, women didn't have the vote, they didn't count for much in the grand scheme of things in the early years of the 20th century. The truth, however, is that as well as affecting almost every woman in those countries in which the conflict took place, a huge number of women were involved in the war. At the time of the outbreak of war, there were still vast numbers of privileged people living in Europe who required nannies to look after their privileged offspring. It was a decent enough job. This fascinating collection of recollections and thoughts brings the point of view of some of the women involved into sharp perspective. Well worth a read.

Fascinating stories about women spread to the four corners during such a tumultuous time in history. Great read!

A comprehensive and vivid portrayal of life during the Great War. Very well detailed and researched, the book is a fascinating representation of the realities faced daily by the Norland Nannies and uncovers evidence unseen for a century providing a new insight into their personal experiences encountered at this most challenging time in World history.

Prefaced by HRH Crown Princess Marie-Chantal of Greece, British Nannies and the Great War is full of facets and features that retain your interest throughout. A thoroughly good read.

A fascinating story of spirited women, pieced together from a treasure trove of lost eye-witness accounts. Objective and entertaining - a remarkable insight into a lost world coming to terms with social upheaval. There is no social record of the First World War quite like it. Superbly written, painstakingly researched and a great read to boot!

Full of inspiring stories of Edwardian women working in challenging circumstances throughout Europe during the upheaval of the Great War. These extraordinary Nannies speak to us through letters penned to their fellow nurses and to the Norland College where many featured in the “Norland Quarterly” magazine. Louise Heren makes us feel part of the very personal stories of Nurses Kate Fox, Marian Burgess, Margaret Ede and many others.

From the Greek and Russian royals to the Belgian refugee camps in Holland and early bombing raids in London, these newly discovered letters give eyewitness testimony as Norland Nurses used their training to bring help where help was needed.

A good blend of academic rigor, accuracy and readability. With each chapter logically flowing to the next, British Nannies in the Great War is a real page turner.

Fabulous new book from the history author, Louise Heren, containing compelling stories about the Norland Nannies who were stationed throughout Europe during WW1. Through her detailed research and careful writing, Louise gives a previously unheard voice to this group of women, thereby adding a new vein of oral testimony to WW1 experiences.

Louise's passion for social history and her ability to convey this to the reader is apparent from the moment you begin reading. Definitely a book not to be missed!

I had no idea that these independent and spirited women travelled so extensively throughout Europe without chaperones during this very restrictive time for women. Louise tells us about lucky escapes from Occupied Europe and daring do with a good slice of Royal intrigue thrown in for good measure. A completely fresh look at the Great War both from a general interest and social history point of view - you won't have read anything like this before.

These previously unpublished letters recount a version of women's Great War history that has remained untold until now. British Nannies and the Great War is the true story of a group of Edwardian, highly trained and opinionated women in the First World War.For the first time in a century, the Norland nannies' unique stories of escape from enemy territory, their experiences at home and the Front during the War, and their thoughts on how the conflict changed their role in post-Edwardian Britain are told in their own words.

Louise Heren is a television documentary producer and director, specialising in history programmes, as well as a social historian with a passion for history based on personal testimony. She has an MA in Scottish History and has recently returned to the University of St. Andrews as a part-time post-graduate student reading for a doctorate in male violence in interwar Scotland. Louise lives in Wiltshire with her family.